Today, October 16, is Women’s Day celebrated by the TDTU union. The way they celebrate it is with a food contest. Every department competes by bringing food.   You cook it at home and bring it in with your serving dishes and take it to the gym, where tables are set up in a U-shape. Then three people, of whom only one can be a woman, prepares your department’s food for presentation. This is men doing women’s work. An outside famous chef and two other people serve as the judges.

At a certain point someone says “Go!” and it begins. They get something like half an hour. While they’re working, we walk around and watch. Then the judges call time and go around and judge. Then they award the prizes.

Here are some photos of the food. 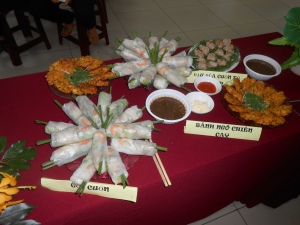 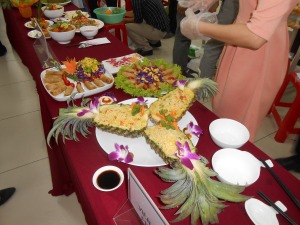 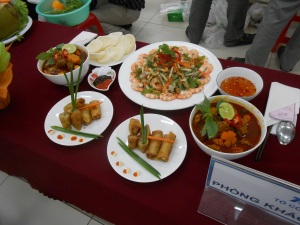 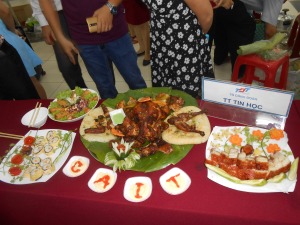 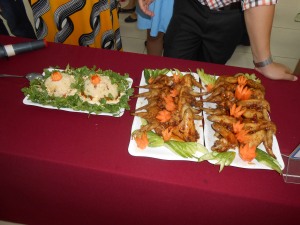 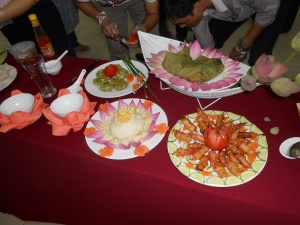 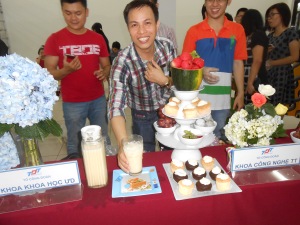 I tasted this. It had coconut in it and was great. 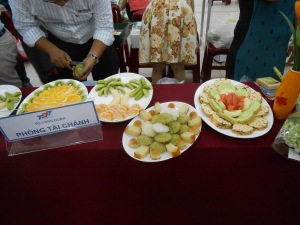 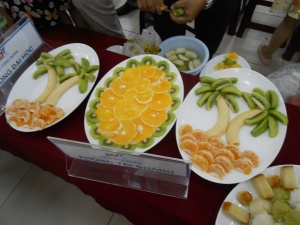 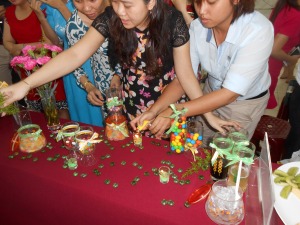 Something chocolate getting lit on fire. 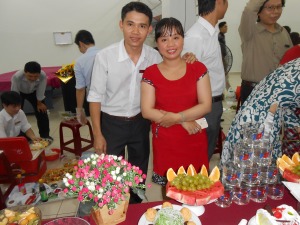 One of the officers who supervises the dorm, and his wife. 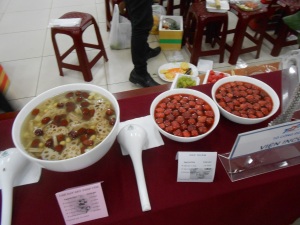 This drink is made with lotus blossom pods, sour plums and something else. I wanted to try the strawberries but so did everyone else. The department that prepared this was “the researchers.” 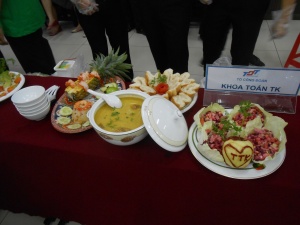 The International Business department. Helen in the pink ao dai and Hieu on the right. 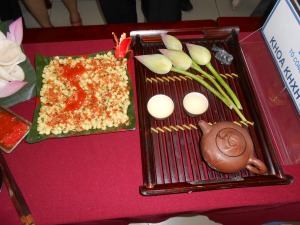 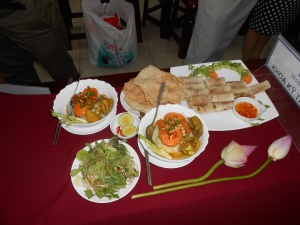 This is the entry of our department, the Labor Relations and Trade Unions Department. 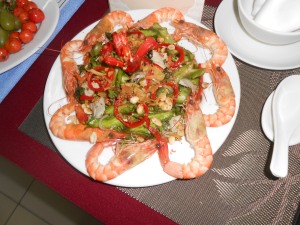 First time around, I missed the Four Magic Animals: A Dragon, a Unicorn, and Turtle and a Phoenix. This is from the Accounting Department. 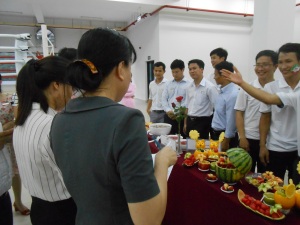 The judges come to look at the Research Department entry. 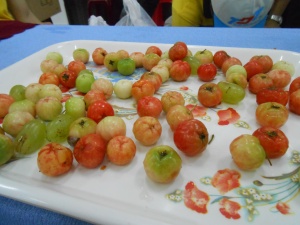 What are these?They are not tomatoes. They are sweet.

Final conclusion: US and European people do not understand food. Here are the facts about food.

Human beings are part of a food chain. Look down the chain to snails, leaves, algae, bugs, and whatever. Look past what you can see to microscopic life forms. This is all food. Look across to our close relatives such as pigs, cattle, monkeys, buffalos and dogs. These are also food. Anything you can dig up, grab, chop, capture, chase and run down is food because they are all alive or were once alive. They all make life out of molecules of carbon bonded with other elements like oxygen, nitrogen and hydrogen. Also, all parts of these life-forms are food. Not just the outside, or the soft parts, or the parts that don’t wobble.

Sometimes you have to do things to food before you eat it. Human beings have lots of ways of treating food to make it edible. Many things only need to be boiled. Other have to be dried, left out in the sun, buried in a jar or soaked in some strong chemical. Sometimes one part of a food is edible while the other part is poison. That’s a different project, quite do-able.

Most of the time, we ourselves are not food until we are dead, and then what eats us is worms and bugs. Sometimes we get grabbed or run down but this has not led to food prep traditions that I am aware of.

And that’s the whole story. There are no forbidden animals (like pigs, for example) or forbidden combinations (like meat and milk).