The Map of Lear’s Kingdom

Yesterday (Monday Nov 16) in Joe’s class he used the Xuan-Trang and Binh interviews from Kent Wong and An Le’s book, Organizing on Separate Shores, that Dang (Tony) translated for us, except that at Binh’s request, we cut out the part about his childhood and military experience. The students read these intently. They made a very powerful impact. It seemed as if suddenly organizing became something they could see themselves doing.

They asked questions like: How can you tell if you have the potential to be an organizer? What do you need in order to start? and What do you do if you have a bad leader? This is the connection between Joe’s class and mine right now: bad leaders. King Lear is an example.

A good student volunteers to play the role of a bad king.

On Wednesday, students in my class performed Shakespeare’s King Lear, starting with Act 1 Scene 2, the scene in which Lear throws everything away. They continued through the end of the play, summarizing but acting it out, all the way through to Lear’s death scene with Cordelia. In Vietnamese, of course.

My reason for asking them to perform King Lear is this. Northouse, the author of our textbook, defines leadership as leaders that he likes. This means that according to his definition, Hitler does not count as a leader. Another problem with this definition is that he avoids having to tell us how he deals with the behavior of a leader who is bad or has gone bad. 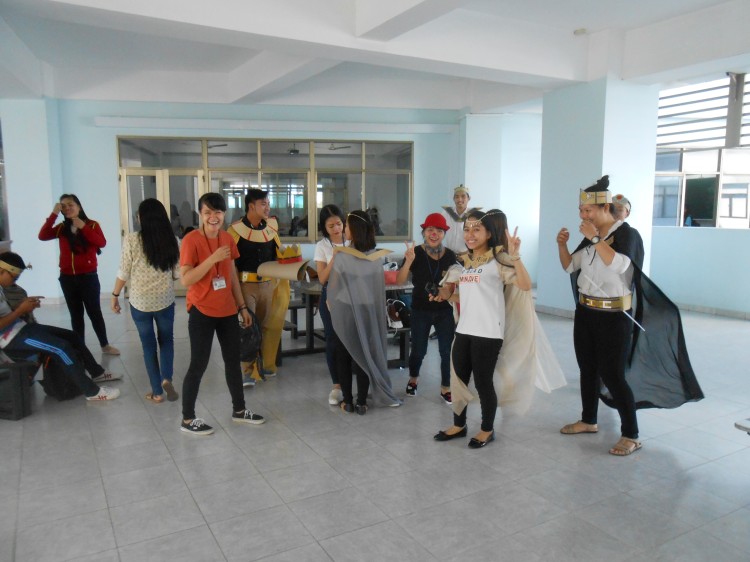 Rehearsal on the terrace on a windy day. They only rehearsed once with me and then did the whole rest of it on their own.

So I gave the class one session on Machiavelli, whose book The Prince was advice to leaders about how to keep power, no matter what. I included a particularly bloody story about how Duke Francesco Sforza brought the province of Romagna under control. Machiavellli says:

As he (Sforza) knew that the harshness of the past had engendered some amount of hatred, in order to purge the minds of the people and to win them over completely, he resolved to show that if any cruelty had taken place it was not by his orders, but through the harsh disposition of his minister (de Orco). And having found the opportunity he had him cut in half and placed one morning in the public square at Cesena, with a piece of wood and blood-stained knife by his side. The ferocity of this spectacle caused the people both satisfaction and amazement (p 27).

Two students did a little role-play in which Sforza asks de Orco if he would please go to Romagna and clean it up. Does de Orco feel honored by the assignment, or does he sense that he’s probably being set up for something awful? There was a moment in the role-play when de Orco asks Sforza if he will give him half his land if he does the assignment. Sforza (played by a young woman whose name I think is Trinth) gives him a quick, narrow-eyed glance. You can tell that if Sforza says yes, de Orco will be sure that Sforza will have him killed (because then Sforza won’t have to give him anything.) Sforza then bargained him down, fooling de Orco or at least getting him off the scent.

So then we did King Lear. In one furious scene, this king throws away his crown, his land, his army; in spite of the pleas of Kent, he loses his self-respect and his mind. When he declares he is no longer father to Cordelia, he loses that as well. Positional and personal authority, gone. Regan and Goneril have been watching him for quite a while, it turns out, and may have set the whole thing up as a trap — a trap that both Lear and Cordelia will fall into. This idea comes from Geoff Hoyle’s play, Lear’s Fool, which we saw last spring in San Francisco, but a student in my class also came up with it during the comments section.

Regan is telling Lear how much she loves him. Cordelia over on the right. The fool is wearing the little red hat and a red knob on her nose; she follows Lear on the heath, bothering him like a puppy dog. Albany and Cornwall are on the left, by the blackboard; France and Burgundy wait over in the far left.

I typed up the script and a team of students volunteered to perform it. They read it out loud to me in English, in our office, and I realized that the Elizabethan vocabulary is no stranger to them than contemporary English – they sailed right through it, oblivious. Once they knew what it said, they turned it into Vietnamese. There were several young people in the group who had pretty good English.

They did a great job and it was wonderful. They even had sound effects: trumpets to announce the entrance of royalty, thunder to represent the storm, and sad music for when Lear is holding the dying Cordelia in the last scene.

I find that I rely on drama, especially role-plays, in order to find out what the students are thinking, much less learning, since I can’t really find out through translation no matter how well Vinh does it.  I realized this after watching several role-plays having to do with grievance handling.  The students always bring more to the role-plays than I had expected. I can discern things from their body language, tone of voice, etc.

After all, the exams do not capture what they are learning. That may not even be what they are for.  The exams are more like ways to punctuate the semester.

Some kind of special learning is going on with all these team activities. Is this what they need, to take them into the future? Maybe. Maybe they need this more than what US students get. I am not sure I’m going to be able to figure it out, though.

One thought on “King Lear in Vietnam”