On Saturday morning the four of us plus Thi, who is a first-year TDTU student, took a taxi to the bus station and then a 16-person van (110,000 D each) down to Vung Tau. The highway is good and new and every roadside inch along the way is built up with shops, workshops, hotels, whatever. Only when we started to get close did we see open land, but it was shrimp ponds.

Thi had a tourist agenda planned for us with many activities, and I tried to explain that we are old people and we like to sit around and talk and look at things. She cooperated with this as much as her 19-year old self could manage. She is one of five, all sisters except for the little guy above. Just thinking about their family makes me smile. Her mother is 41, looks great, rides a motorbike and made us amazing seafood lunches. Her father works for the oil company as a machinist (as far as I can tell; he came home in an orange jumpsuit with oil stains on it). There are ships in the harbor that belong to this oil company and a helipad a few blocks away, on top of a big office/headquarters building, where helicopters land ferrying workers out to the ships. Their house is in a neigborhood developed for oil workers. It’s a typical multi-story Vietnamese city house with shiny floors and big carved wooden furniture.

Thi and her mother when we went out for seafood on Saturday night.

Thi endured and handled well a series of long conversations with four adults, all asking her about what she studied, why Vietnamese students do this or that, how the school system works, what books she read, etc etc. I think that if I had had four adults peppering me with questions for hours on end, in a foreign language, I would have been exhausted. She held up very well.

One of the reasons that students volunteer to be in the group that does things with foreigners is so they can improve their English. Thi certainly got a workout this weekend. One of these conversations took place at their kitchen table after lunch with her mom circulating in the background. If I had been her mom, I would have been proud of her.

After our first lunch (one of two prepared by Thi’s mother, who is a serious cook, expert in the subtleties of very fresh, very local seafood) we took a walk through the neighborhood. 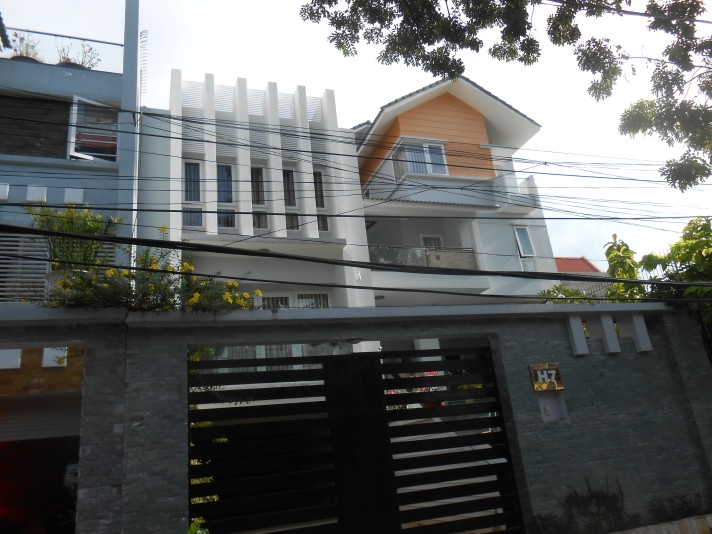 There are three houses in this picture, plus a sliver of a forth on the right. They are tall (at least 3 stories), open to breezes, and have a combination of public and private spaces that is fundamentally different from what I’m used to.

We came to Thi’s high school. She went to a public high school that accepted students who had tested as “gifted.” At age 14, which is the school-leaving age in Vietnam, (ninth grade), she took a test that identifies students as gifted, OK, or failed. If you fail that test, you can either pay a lot of money to go to a “private school,” which is for students who are “lazy,” or else if your family cannot afford to pay, you can go to work, or in some cases get vocational training.

Thi did her best to answer these questions.

At Thi’s school, although it was Saturday, there were two rooms in which students appeared to have gathered. The boys were in one room, being rowdy, and started calling “Hello!” to us. Then the girls, in the next room came out and began a conversation. It turns out they were studying for a big test, in history. History did not used to be one of the subjects that was tested. Now, a history test has been instituted. I would like to know what the story is behind that, and what is on the test. Here are the students: 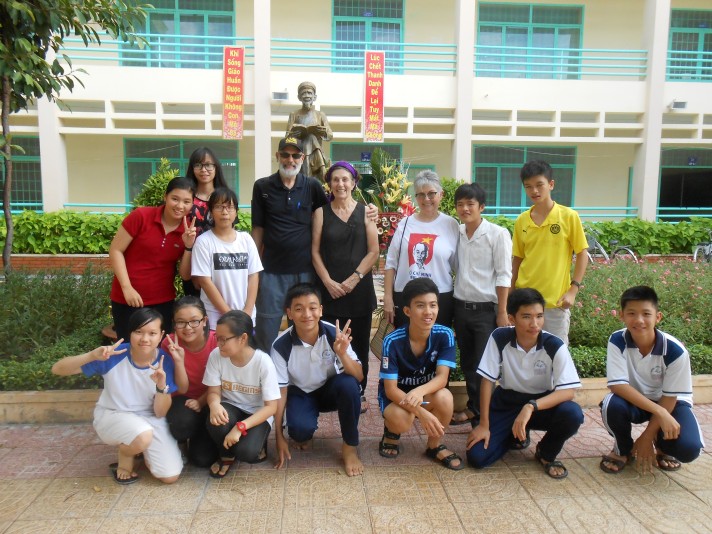 Thi asked us if we would like to climb a mountain. Since yesterday, on Teacher Day, I did two things that I had not planned to do (run in a footrace and pull in a tug-of-war, not great for knees or back), I didn’t jump at the opportunity, but it turned out to be a wonderful tree-shaded paved winding walk up a small mountain (a little farther than walking from our house up to Tilden) past several temples, many smoothie stands, and some actual monkeys who live in the trees over one temple. This is evidently the aerobic walk of choice for Vung Tau residents on a nice Saturday afternoon.

At the top, Leanna and Thi and I sat at a table and drank papaya and mandarin smoothies while the sun set over the harbor. Joe and Hollis went on up the last stretch, which was rocky, not paved, and came down in the dark.

On Sunday, after I explained to Thi that no, I did  not want to get up at 6 am and go swimming in the sea, the adults all went to the same coffee shop to warm up our brains for the day, reading our books and drinking various Vietnamese coffees. Thi came around at 9 am and we took a taxi to the beach.

The water is warm, the waves are great for very gentle bodysurfing, and the fact that the sun is not blazing down is a good thing. A clean water shower costs 10,000 dong.

These are Vietnamese women’s bathing suits. Although they are modest, they are two-piece, which means that they would not be allowed on swimmers in the pool at TDTU, where girls wear one-piece bathing suits with skirts and usually something that covers their shoulders. It is not unusual to see a girl in a suit that looks like a wetsuit, covering her legs and arms, but with a skirt, plus a bathing cap and goggles. I see this when I go swimming from 6:00 to 6:30 on weekdays and the “swim club,” with students learning to swim, arrives en mass at 6:30. The issue is partly modesty and partly temperature, since to them, the pool water is cold.

These guys were singing loud Karaoke and dancing around while they made a huge seafood lunch next to the beach parking lot. I asked Thi what the songs were and she said they were Vietnamese military songs from the war. There is a certain character to these songs, which remind me of Russian orchestral music and the Israeli Song of the Partisans. They are in four-four time, of course, but they are in a minor key, and rise to a heart-breaking pause in the middle where you hold a high note  as you stand on the top of a mountain and look back over all the sacrifices that have been made for your country. This is very different from “The Halls of Montezuma,” “Oh, Say Can you See,” or, for that matter, the Marseillaise, which are all in major keys and go whump-bump-bump-bump.

After lunch on Sunday, Thi’s father brought out a bottle of something that tasted like very good whiskey. It is made somewhere in the North. 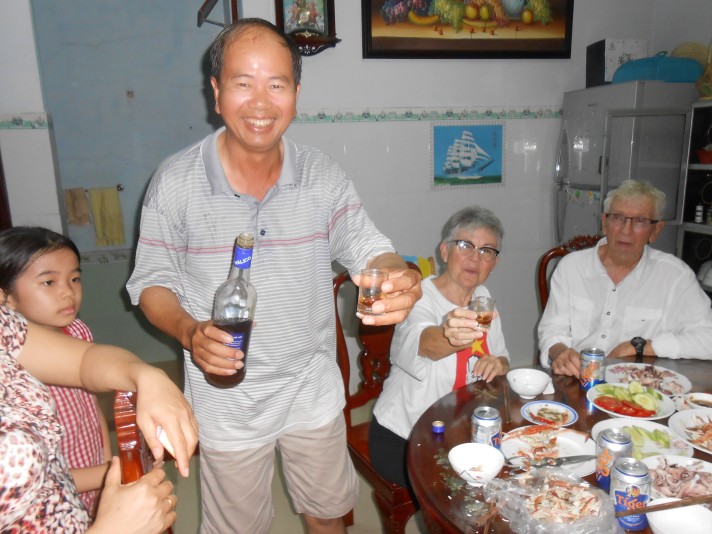 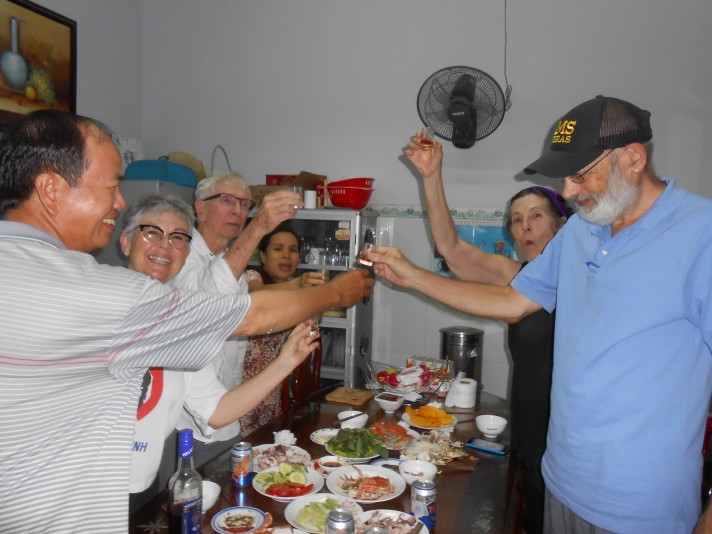 Van back to Ho Chi Minh City, in the rain. Big motorcycle accident (three bikes lying in an intersection) on the way.

One thought on “Vung Tau with Thi”