TDTU is kept shiny and new by an army of people who sweep and polish and repaint continuously, including these guys.

From below, with the sun on their backs: 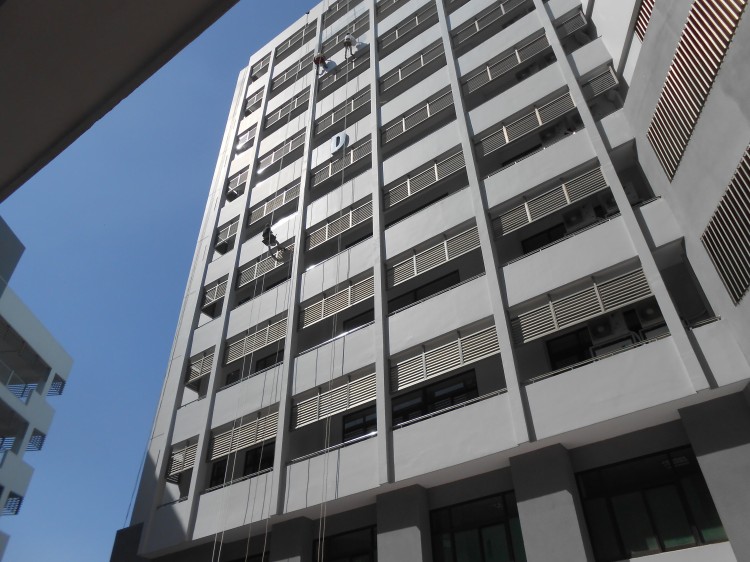 What’s holding them up?

Consider…how is the railing attached; what kinds of knots are those; what if the guy moves his foot? 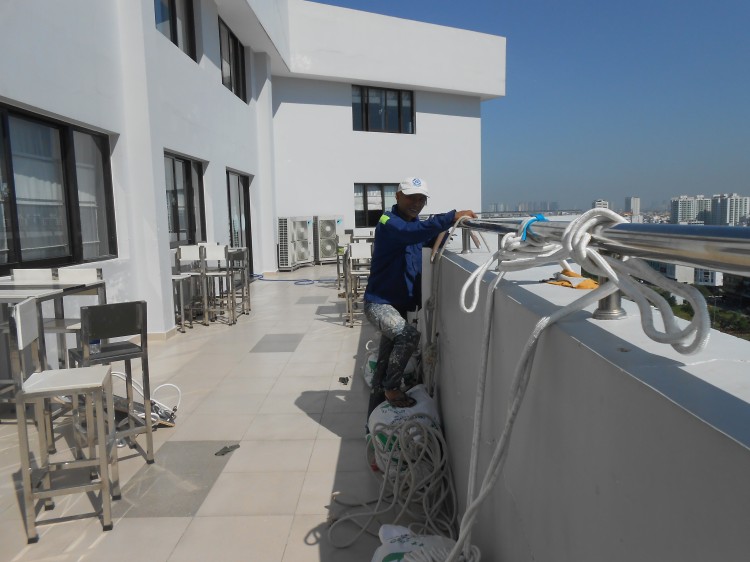 Actually, I think that assuming those are really good ropes (and it looks as if they are) the only thing that matters is what’s in the sandbags.

You wouldn’t dream of calling these unskilled or low-skill workers, although they work barefoot.

In the rear you can see what appears to be a new river or drainage slough being dug by one guy in an excavator who has been at it for about a month. He’s persistent. Eventually, his river will meet the big river. That will be an interesting moment! 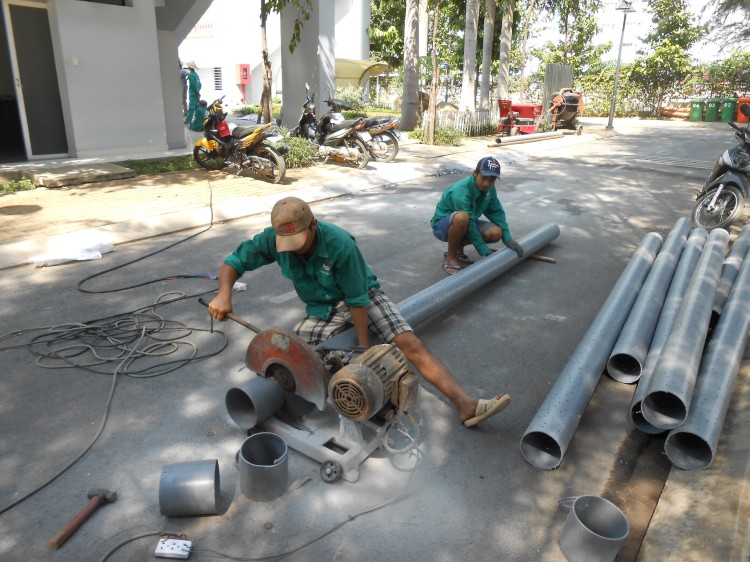 The pipes for draining the soccer field get delivered to the site, but then they have to be cut to the right length and then the holes get drilled into them, one at a time. One guy holds the drill and the other guy rolls the pipe slowly around.

So let’s try to figure out what the pipe cutter’s rate of productivity is and see if it is cheaper for him to cut and drill the pipe on the site compared to having the pipe cut and drilled at the factory and delivered ready to install. How cheap does he have to be? Let’s call him Ron, or R, and say that he’s being paid 20,000 D per hour (a little more than most of our students are earning).

Now the girl economist gets lost. Some workers at the factory get laid off, of course. Their wage goes to zero.And what happens to Ron now? Does he get absorbed into the soccer field project? Let’s say yes, and he still gets his 20,000 per hour and no longer has to run a circle saw through hard plastic without safety glasses. Does he get trained to have higher skills? I think the skill he is displaying, cutting pipe all day and not getting hit in the eye, is pretty high.

This is Nguyen Thi Cam Trang, who cleans in B Building and cleaned our office today, sweeping, washing and dusting every single surface. She is wearing a TDTU T-shirt because she is one of the Happy Cleaners employees who switched over to TDTU (see our Student Reports for that story) when they found out how much more money the TDTU folks were making for doing the same work. Now that’s a skill, too.

This is a guard, one of the ones who watch the gate near our room. They work on 24 hour shifts. This guy is very friendly and likes to practice his English. However, they have been told — everyone at TDTU has been told — that they have to speak English. Look at the student reports to see what their working conditions are because they were one of the groups that our students researched.