Christmas Day we had dinner with Cate Poe and Jeff Phelps who are on an Asia trip.  Jeff was in Vietnam as a soldier at a time when it was clear that the US was getting out. No American wanted to be “the last one to die” in a futile war. LIFE magazine did a photo article about Jeff’s unit. He’s in some of the pictures, but not by name.

The article is hard to read. While it mentions the lack of support for the war on the part of the US public and the low morale in the army, it is not an anti-war piece. It’s carefully and tightly about how military discipline is softening in a unit where the soldiers do not want to be there. They are not reluctant because they’re against the war, although some have misgivings. They’re reluctant because they don’t want to die. And that’s all. This distinction is a sharp line, carefully drawn.

Evidence of that sharp line is the use of the word “gooks” at least 6 times. North Vietnamese fighters are called “the enemy” twice and once each for the following: contacts, kills, Communists, and NVA. Talking about the failure of a mission to make contact, the commanding officer says, “Professionally, I’m still hungry.”

A Black soldier who observes that Blacks don’t  get many promotions refers to the North Vietnamese fighters as “the little man.” You can see a peace symbol around one soldier’s neck, long hair on others.

The sympathy is for the soldiers who are dragging their feet, refusing to go out on ambushes, doubtful about the war itself, smoking so much pot that the base “smells like a burning haystack.” None of the sympathy leaks across the line to humanize the enemy, not for a moment. That was not the assignment and the writer of the article was very careful.

Jeff was born in 1949. I was born in 1943. Cate was born in 1955. Joe was born in 1948. So we were spread all around that decade. Dates matter: Jeff was drafted 6 months before the lottery went into effect. Joe got summoned to his third physical at a point in 1971 when the army was keeping anti-war activists out, not punishing them by sending them to Vietnam. When Joe told the shrink at the induction center (in Oakland) what he planned to do when he got into the army,  they gave him a 2-Y, which meant “pathological passive aggressive,” a diagnosis created for war resisters, and pulled out a bottle of whiskey.

On Christmas, we sat at the table for a long time, talking. We ate at an Indian restaurant near Cate and Jeff’s hotel, The Majestic. One topic that came up was “What was the moment at which you realized you were down to zero with knowing about something — when you realized that you were either totally ignorant or else totally wrong about something important?”

My own example is when I was 16 or 17 and in Vienna, on one of my month-long jaunts during the vacations from the school in London where I was an exchange student. I was walking around in the center city one day and met a nice-looking middle-aged woman in a wool suit (it was April) who started talking with me in English. This was 1961. We were commenting about the opera and other concerts, which I was attending as much as possible, until she asked me where I was from. I told her and then asked her where she was from: “Russia.”

I heard the word “Russia” and I took to my heels. I am not kidding. I turned and ran, at least a block and around the corner. The word “Russia” struck such fear into me that I did not even take a breath before I ran away.

Afterwards, I walked around for a while in confusion, but I never figured out what had happened or why I behaved as I did.

Looking back on this, I would name this as a point at which I could be said to have zero knowledge about something very important that was going to matter to my life. Zero!  And in 1961, the US was already in Vietnam.

I am surprised by how ignorant I was. Last summer, going through the old wooden file cabinet in the barn attic in Vermont we found a box full of slides showing Felix Greene’s visits to Vietnam in 1965. This was a set intended to be used in presentations in the US to dissuade the US from supporting the French colonial regime in Vietnam. The US moved from supporting the French to replacing the French, which turned into what is known here as the American War. Slide #50 is missing. Dad’s handwriting on the box of slides says, “Felix Greene Slides of North Vietnam (ONI & FBI took #50 showing Greene and Ho Chi Minh together).” I don’t know what ONI refers to; maybe Office of Naval Intelligence. He was in the Pacific in the Navy in WWII and retired as a Lieutenant Commander. 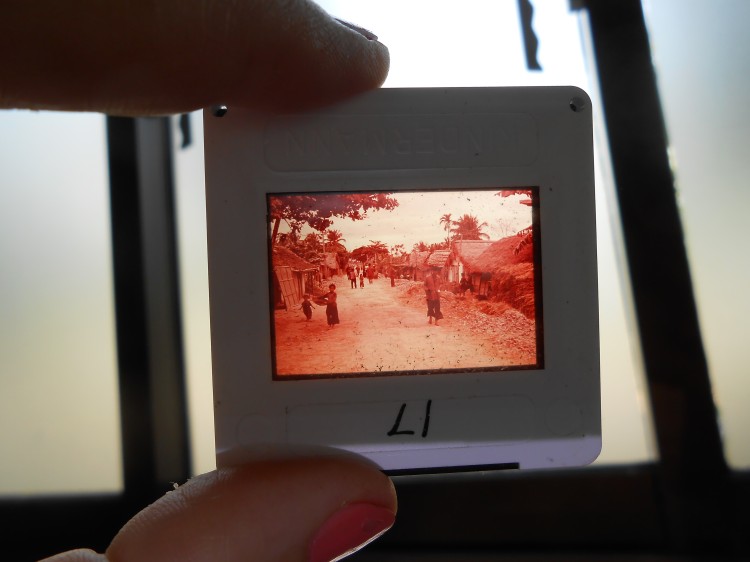 He and Mom were turned in by a neighbor in Lake Dunmore, Vermont, for showing these slides at a meeting. Dad often gave presentations as local history associations; he was a history teacher. It would be perfectly normal for him to do this presentation. So the FBI came to the house and talked with them. I remember Mom saying she fed them cucumber sandwiches.

In addition to the color slides, the box contains newspaper clippings from the Akron Beacon Journal, a 3 3/4 inch audio tape of Felix Greene talking, a written description of each slide for use when a tape recorder is not available, and a paper about 25 pages long, typewritten on small squares that fit in the box, that gives a history of Vietnam and the war.

We have an appointment with someone at the HCMC War Remnants Museum at 9 am on Wednesday, to see if they would like to accept this box as a donation.