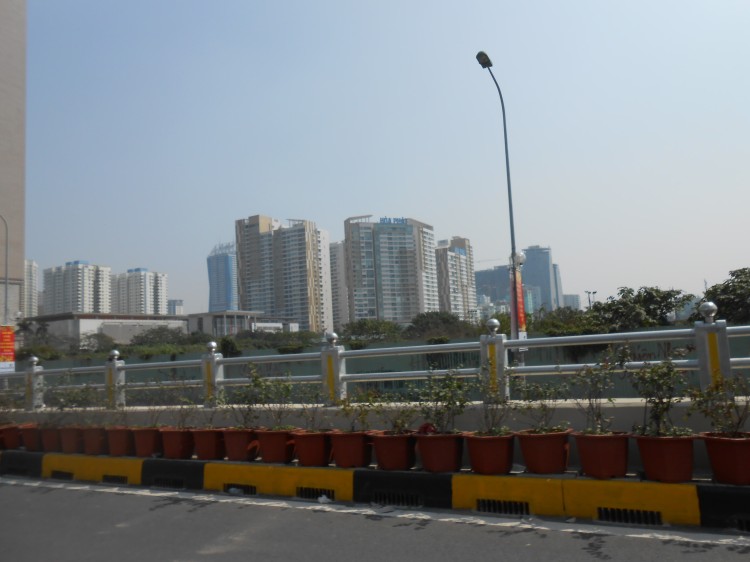 Tuyen drove us around the north side of Hanoi on what looked like a new highway. Here is where the new developments are happening: huge apartment buildings that look like “projects” but aren’t. They are expensive and desirable. No streetscape, all high-rise, at least in this picture. This is called “Singapore-style.” Nearby, one developer, Vinhomes, has covered many acres of land with gated neighborhoods villas: http://vinhomes.vn/mua-ban/du-an/vinhomes-times-city

See my post Hanoi II, Realism, back in mid-December, for the painting that captures this.

We had dinner with a young couple who live in this area. These were agricultural lands. (You can still see this; cattle were walking along the road we are driving on, and rice is growing in between the developments.) The permit for their development was rushed through in 6 days, which also happened to be the 6 days before something in the law changed that would have stopped the development. It may have been related to how much the people were being paid for their land. They protested and were met with police action, and when the young woman we talked with tried to find out what had happened — since she had just moved into this development herself – she found herself being questioned by police.

City planning here is the product of centralized decision making. The decision is made at the center: by the time its impact is felt on the periphery, there is no way to push back effectively.

Christy Rogers in San Francisco sent us this link:

What centralized decision making has to do with discussions

Tuyen was showing us something about the city he grew  up in, loves and lives in now. Of all our friends in Vietnam, he is the one with whom, for many reasons, we can discuss the most complicated issues. One reason is of course that his English is very good — not accent-free, but he has a good vocabulary and that comes from reading as well as conversations. You can have a discussion with him, in English.

During the last six months we have talked a lot, with many different people, about discussions. The whole concept of “discussion” is something to take a look at. First we tried to introduce it as something that would happen in our classes. How could we get students to discuss something rather than simply stand up and produce the correct answer to a teacher’s question? How could you get one student to respond to another student, and then a third weigh in, and let the conversation grow until something new appeared that hadn’t existed before?  I think it happened once, once only, that we got a student to respond to what another student said in class. (True, after a student team  made a presentation, students would comment — sometimes several in a row – which was good, but it never was actually a discussion. They said things like “I think you were not serious,” or they’d ask a question and then sit down.) The idea that certainty is on hold while different perspectives shine lights on different sides of something did not get conveyed to our classes.

Then the issue of discussions showed up when we tried to do the “academic workshops” and said that if you’re going to use George Borjas to teach labor economics (even if that is the title of the textbook) you have to situate the text itself in the discourse — the historic and current discussion — about labor economics. The purpose of this is not only to help students take a critical view of the text — who is he, where is he coming from, what does he want, who are his allies, what is the effect of his ideas? – so they can understand what he is reacting to, what he is building on, what the other branches of the tree look like. It is also to enable them to become part of the discourse (meaning the whole conversation, past and present) themselves, so they are not just consuming the learning, they are also producing it. If they are undergraduates, this will help them really become “global people”, as our colleague at RMIT said. If they are hoping to be academics, this is what they absolutely need in order to publish anything, worth reading or not.By publishing, you join the discussion, but in order to do that you have to know it intimately.

This approach did not go anywhere.

Then there was the TPP seminar, and our effort to move the event from being a sequence of papers presented to a passive listening audience to a discussion in which everyone who had an idea would participate. This didn’t happen. People who knew a lot simply sat there, explaining to me later,”I was an observer.” Side lesson for me: being deliberately provocative in a context like that is pointless. No one is going to pick up on what you say and refute it. See my posting of January 14 or so. You will be left hanging, having overstated something or made someone angry, and there won’t be an opportunity to bounce back. (That was partly what was so pleasant about the January 26 discussion when the IT guy and the math teacher started challenging each other. However, we noted that in that event very few if any administrators were present; it really was nearly all lecturers so there was no pressure to get things right.)

Surrounding these explicit attempts to ignite a discussion are the times when we have asked a question about a discussion and either drawn a blank or been told simply “No, it doesn’t happen.” We asked our colleague who is trying to develop an alternative curriculum for the moral philosophy courses, based on human values, if there was any discussion at the levels of government where such a new curriculum would be authorized: she, if anyone, might have been part of that discussion. But she didn’t know anything about it. Even though it would have been appropriate for her to be a leading voice in it!

What’s the problem with having no discussions?

When there are no discussions going on among people at the edges, the decisions that are made at the center come down unexpectedly and make the world seem unpredictable. Even if they are good decisions, even if they are what you wanted, the surprise makes them unpleasant. You feel helpless. It makes life more of a gamble. It’s like picking up pennies on the street.

This corresponds to my sensation of being in a country where walls go up and then suddenly come down. For example, we just found out that the President of the VGCL, Mr. Tung, has made it a condition of VCGL support for TPP that the VGCL have autonomy with regards to both its finances and hiring. (Currently, all union staff is hired by the government — the Party – and then assigned to the union.) These are huge demands, but utterly necessary. But when did this happen? Who knows about it? If TDTU is training undergraduates to become on the one hand, HR managers and on the other hand, union leaders and staffers, is there not a discussion here of which they should be a part?

We are so used to “discussions” in the US that we are almost blind to them. It seems as if everyone we know (at least people our age) belongs to a “book club” where you read a book and discuss it. The library organized or supports these, but people also just do it. We go to the monthly discussions around Jacobin magazine, which draws a group of 20-25 young people from all sorts of left political tendencies. Then there are discussion lists, including my academic “home” list, XMCA, which has people from all over the world who have in common an interest in Vygotsky. So discussions are like wallpaper, invisible but all around us.

A good example: Joe found the following talk by Bill Fletcher on YouTube:

Technically, this is a speech, but in this case the speech is  part of a very important discussion. Fletcher is not a government official.He has no authority to made decisions. What he says about what we (the US and the world) ought to do is not going to result in legislation or the sale of a rice paddy to a developer.  But he can, and should, contribute to the discussion because he knows a lot, has a lot of experience, and can frame his ideas very clearly in a way that people can understand and remember. People want to know what he thinks/ So he contributes to the discussion. People (in this case, an organization, Justice Works) invite him to talk (maybe pay him), and he prepares a talk based on what he knows and people come — they probably fill the hall and stand in the aisles — and listen to what he has to say. Then they go off and talk about what he said and disagree or agree, or send the YouTube link to people they know, etc. etc.

The point is that although he has no authority to make any decisions, he can influence what happens by speaking out and shaping the discussion. This is not a problem. Not only is it not a problem, it is actually his responsibilty.

“The discussion” means all the different conversations that people are having, the ones before and after, the ones that refer to this, agree with it and the ones that oppose it. It’s the whole flow. If it’s a big discussion (like, right now, the presidential campaign) then it has many streams and threads and thousands and millions  of people talking to and over each other.  Within that discussion, people are influencing each other, and there will be an outcome that will matter.

Can you have too much discussion?

One of the arguments against allowing discussions is that it will confuse the public. Now that Bernie won New Hampshire by 20 points, the dirt is really flying. The New York Times writes articles about what Hillary says about Bernie; that’s the news. The NYT is like an old fat man trying to rise out of his chair to make a speech without spilling his drink. Beyonce seems to have said something political while dancing and singing at the Super Bowl.  This has made other people mad. It’s a mess.

Indeed, this is a problem. I remember when I worked for UNITE in Philly and wanted to used Schwartz’s Legal Rights of Union Stewards for teaching…well, actually, teaching the legal rights of union stewards. The president of the union, John Fox, forbade me to use it because “it will confuse them.”  After a few weeks he agreed to let me take it to the class but not to let them keep the book over night. Eventually, he let me give each person in the class a copy. Finally, they were so un-confused that they actually got it together to perform some direct action that won them their vacation pay, but that’s another story.

One thought on “Hanoi, discussions”