Here is the website for Project Renew, that has been doing useful, small-scale lifesaving work for many years. We learned about this from Chuck Searcy in Hanoi. 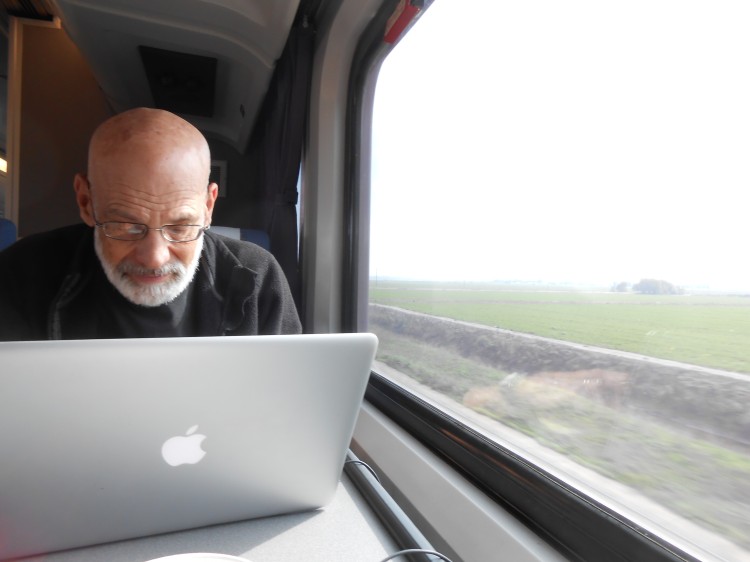 OK. Some people seem to be still reading this. So now, back home in the US, I am going to try to describe what my life is like here using the same perspective that came naturally to me in Viet Nam. In Viet Nam I was always asking, “What on earth am I looking at? Why are they doing that? What’s going on? Are they serious?”  Asking those questions was easy, and since I couldn’t speak Vietnamese, I often never got clear answers to those questions. Or I got a series of answers that changed over time.  But now, I am going to try to keep the communication going by sketching in what things are like here in the US, for us, in the lovely bubble world of Berkeley, CA.

I will put in enough personal stuff so that you can keep track of what’s going on but hopefully, not enough to embarrass my family or neighbors. If you want more personal stuff, write me a message.

That’s Joe on the AMTRAK San Joaquin Valley train, going to Los Angeles to hook up with our son Jake and his twin boys and go camping in Joshua Tree National Park. Here is Joe cooking at the campsite: 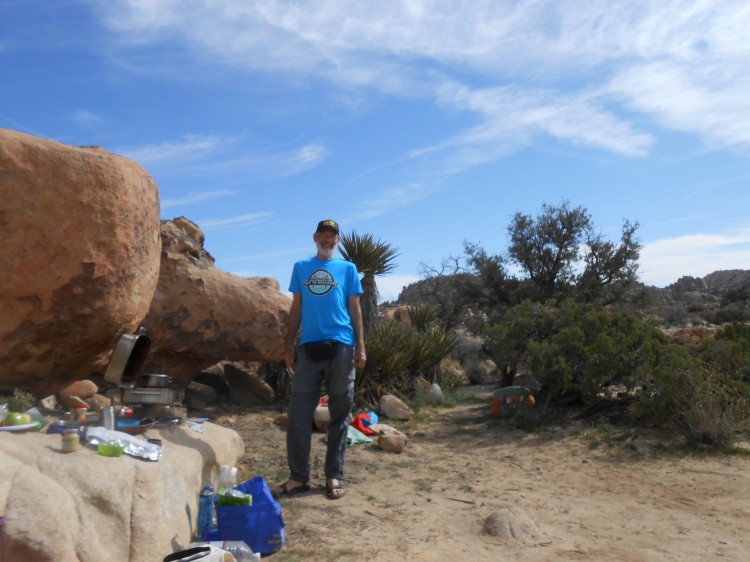 You will notice a lot of stuff sitting around in bags. That’s what happens when you drive your car to within a short distance of the campsite. You bring too much stuff. Sometimes you forget the essentials. I intend to make a checklist for our next camping trip, to avoid that problem next time.

Nevertheless, it was a great trip. All goals were accomplished. The boys ran around all over the rocks and found beetles. That’s them in the distance, wearing their sun hats. 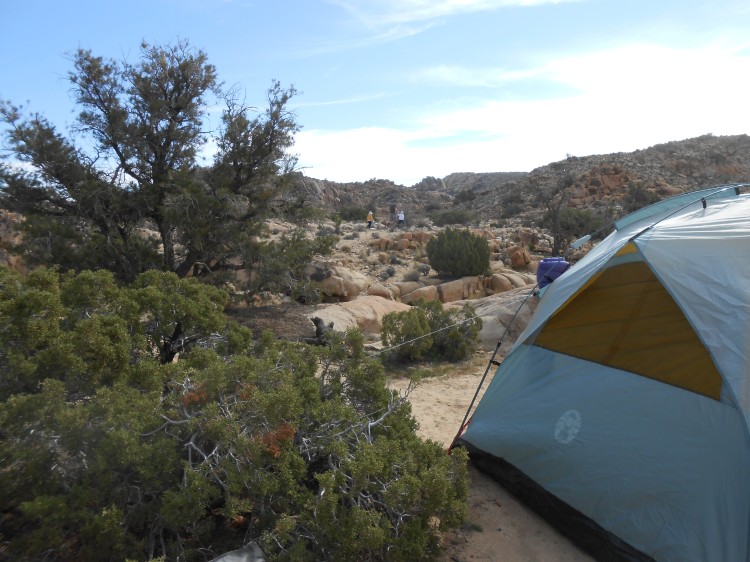 The stars were phenomenal. The sky is really that blue; nowhere in Viet Nam did I see sky that blue. There was either a mist or a pollution haze, even on the clearest days.

This is Super Tuesday. That’s the day that 12 states hold their primaries. Trump is sweeping the Republican primaries. You thought it was a joke, right? It’s not. Not all extremists are Islamic fundamentalists. On the other hand, Bernie has won four states, amazingly. Vermont, of course, where people have elected him to various offices for 30 years and voted 90% for him. Then Colorado, then Oklahoma, and now Minnesota. Hillary has won the beltway state of Virginia (not surprising) and the South (Tennessee, Texas, Georgia, Alabama, Arkansas) but also Massachusetts, although that was close: 50%-48%.

One way to describe the mood of anxiety that pervades us here is “scarcity within excess.” A gut feeling that there is too little of what you want, when you’re surrounded, even being choked, by more than you need. Among Trump’s supporters, I think this anxiety reaches the level of panic. You can feel the panic in the eye-popping racist dramas that are appearing on Facebook: the young black woman getting shoved at a demonstration, the mini-ballet where Trump tosses “Mexicans” off the podium, another clip where a white guy who has come to harass an anti-fracking demonstration and turns his venom on the camera guy, who is black. The content of the panic is fear of the “other.”

Mitt Romney made a speech yesterday in which he called Trump a “fraud” and likely to “lead the country down a dark path”, which is true, but Romney’s credibility is weakened because he, like many other Republican leaders, has been perfectly content to use Trump’s publicity machine to prop himself up.

I mentioned “stuff” in the photo of our campsite. The issue of “stuff” in the US is not trivial. A growing industry is storage units: people build long rows of locking boxes the size of small rooms and rent them for a fee, so that people who have excess stuff and put them into storage. What’s in these boxes? Clothes that don’t fit; rugs that need cleaning; broken small appliances. Photos, coupons, ads. Things that looked like a good deal on the shelf at WalMart.

I will try to get control of my tone of voice. Not everything has to become a lesson about capitalism.

Joe’s class at City College in the CityBuild Program

Today Joe taught a class at City College of San Francisco. The class began at 7 am, so he had to leave the house at 5:15 in order to get there on time. It’s a class for people who want to get into the building trades union apprenticeship programs. The topic is labor studies. Of the 34 people who take this class, all are black except for 2; all are men except for 3. Some are in their 30s and 40s. They are in a program called CityBuild.

Where does such a program come from? It is widely recognized that the unionized building trades, which provide good wages ($25-$45 an hour, plus benefits including healthcare and pensions), have also practiced discrimination against women and minorities. The percentage of women and minorities who get these jobs, as compared to the while males who get these jobs, does not correspond to the percentage of women and minorities in the general population. Back in the day, some building trades unions actually publicly declared that they were “white only.” Fathers and uncles would make sure that their sons and nephews got the announcements about when tests would be given, knew what fees had to be paid, had good tools, and otherwise got a hand up getting in the apprenticeship programs. This was known as the “sons and nephews” problem.

Because this problem persists, various programs have developed, usually funded by state or federal money, to counter act it. Union or construction industry money also supports them. I worked on one of these programs in Chicago between 2000 and 2011, called the Building Bridges Program, and wrote quite a lot about it (available if you’re interested). This one is hosted at the City College of San Francisco, a huge low-cost public community college with academic university transfer programs as well as vocational and lifelong learning programs. There is a battle going on over the survival of this college, but I’ll write about that elsewhere.

So Joe got called in mid-semester to take over this class because the previous instructor got another job. The class is once a week, Tuesday mornings, from 7 am to 1:30 pm. The 34 students are broken into two cohorts of 17 each. That means Joe has 17 students from 7-10 am and another 17 from 10:30 to 1:30. This is a very good size for a class; lots of discussion will be possible. No microphones necessary! During the rest of the day they learn trade skills; the class building has a wide open central area in which they put up and take down small houses, walls, plumbing, etc. They study blueprints, learn to use tools, etc.

This is exactly the kind of teaching Joe likes best: teaching about unions to people who are working and who need to understand the social, political and economic context they are surrounded by. The students, who come from very wide-ranging backgrounds (including prison) are tremendously motivated and prepared to learn, because they know from experience what it means to have, or not have, a decent job. We will talk more about this later, too.

At Ton Duc Thang, we wrote many handouts for our classes. These handouts were intended to bridge the gap between available materials that reflected the “harmonious labor relations” tradition, in which a few top leaders from a union and a company solve problems quietly, and the more US-style labor relations culture which is much more adversarial. We could see that as more direct foreign investment comes into Viet Nam, and more and more employers bring the adversarial perspective to their workforces, and the labor regime in Viet Nam has to adapt to the requirements of the TPP, the “harmonious relations” approach would leave workers vulnerable.

By the time we finished our classes, we realized that we had a whole set of chapters of something that added up to a coherent whole. They had also all been translated into Vietnamese.  Therefore we committed to tidying them up, sending them back to Viet Nam in the hopes that our friend Vinh or others would do a final once-over on translation, and then we could distribute them to anyone who is interested.

That’s the main project that we have in front of us now, with a few secondary projects.

But one more thing: just to update you. A friend of ours was at an organizing training workshop in Los Angeles and met a man who said he was organizing workers in Viet Nam. He said he would like to meet us, and we felt the same way, so we invited him to come to our house and he did, bringing with him a woman who is also involved in this project.

The two of them are funded by “overseas Vietnamese,” of whom there are apparently 4 million, many of whom are very rich. They contribute to an NGO which in turn supports this project. So far, the organizing has consisted of him going to Cambodia where he met with a small group (10) of Vietnamese workers who crossed the border to come to him. They were all men; one woman was going to join the group, but dropped out at the last minute. He says that he teaches workers’ rights. We were not able to find out exactly what he meant by this. He did not seem to know much about labor unions. He himself came to the US in the 1960’s, went to San Francisco State University, and has not been back to Viet Nam since then.

He teaches economics at a community college south of San Francisco. He referred to “Free Viet Labor” which is affiliated with http://www.protectvietworkers.com/

Like in the US, there is a great deal of money to be made by taking sides against whatever labor regime is in place. We have a whole industry here that claims to be protecting workers against organized labor.