Lunch to Lunch, Land to Land; UALE and Democracy Spring 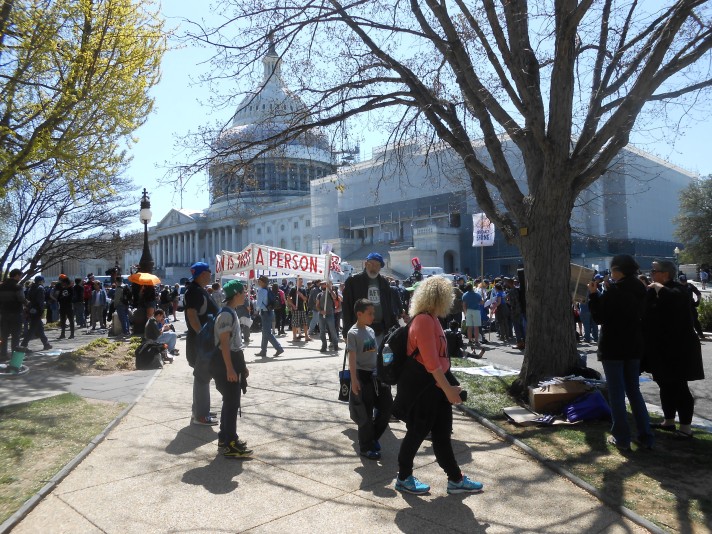 Democracy Spring demonstrations at the Capitol; see last section of post for details. The white cloth banners say “A corporation is not a person”.

The second part of this post draws from research by Dang Bao Nguyet.

The single insight that seems to catch hold when we talk about our experience in Viet Nam is the one about “lunch” – that is, that when our students work for one hour at their jobs they earn 17,000 dong (or maybe 11,000, or sometimes 20,000) and when they go to buy lunch in the canteen they spend 15,000 dong for a bowl of pho. In other words, an hour of low-wage or minimum wage work in Viet Nam will buy you a cheap lunch.

A good lunch will cost more – 26,000 dong, for example – which is the amount that some employers will give their employees to go buy lunch during break. A 26,000 dong lunch will consist of some rice, some veggies and a little bit of meat. There is actually a discussion going on at the national/state level about whether workers on minimum wage get enough calories. Plenty of people think the answer is “No,” but then you get into a different discussion about how productive Vietnamese workers are, whether it’s lack of calories or lack of job training, whether the minimum wage should be increased, etc.

But the thing that catches people’s attention is that the 17,000 dong lunch in Viet Nam is the mirror image of the $7.50 or even $15 lunch in the US. In other words, if you earn minimum wage, even the “aspirational” minimum wage in the US, what it can buy you, basically, is lunch – whether you’re here in the US or in Viet Nam. Not housing, not transportation, communication, education, clothing, entertainment, healthcare, or any of those things – just lunch. A sandwich. If we’re matching minimum wage to minimum wage, Viet Nam and the US are the same. When we’re talking about the race to the bottom, it’s over: For most people we are there, right down there with Viet Nam.

It’s the exchange rate that confuses people. Those 22,000 dong are worth a dollar. So one dollar can buy about five lunches, which makes American tourists feel rich and makes American companies feel that they can buy a whole lot of hours of labor for not very much money. But if you look at it from the perspective of the worker – not the tourist, not the employer or investor – then we’re sitting in the same seat, looking at the piece of purchasing power, asking the same question, “How are we going to make it on this?” – whether you are a US or a Vietnamese worker.

This way of explaining things seems to stick when people we have met listen to it.

There is another way to talk about the match between the US and the Vietnamese economies, however. I got this from reading Dang Bao Nguyet’s research proposal, “Facilitating the agency of landless farmers in Viet Nam as a means to improve the effectiveness of public policy interventions.” We met her in Hanoi in February via a connection through XMCA, the Mind, Culture and Activity email discussion list.

Land to Land: Who was displaced from the land when they built the factory where your job went?

When we were working in Illinois (1999-2010) we were always conscious of a backdrop of empty factories, boarded up warehouses and train tracks overgrown with weeds. Right in the middle of a town there would be an empty space that had obviously once been the site of the place where everyone worked. There were still churches, schools, shopping, neighborhoods clustered around this vanished thing, but now it was just a piece of flat, dusty open space fenced in and paved over, a ghost workplace. This was how reminders of the American economy fifty or a hundred years ago stayed present right before your eyes. When you go on YouTube and look up labor history movies you see and hear the sound effects of workers streaming in and out of factories of various sorts, bells ringing, trains moving, streets full of people hurrying along. Then you look out the window as you drive or ride through the city and you can hear all those sound effects but instead of seeing crowds of people, you see weeds, empty windows, bare land.

Yesterday I came up from Washington DC on the train, heading to Brattleboro Vermont to take a look at our little house in Jamaica which has been rented out all winter. The AMTRAK route has been changed a bit – it no longer stops in Amherst, Massachusetts. Instead, it goes through Holyoke. Holyoke is where one side of my family is from, on my grandmother’s side. They worked in the dry goods industry and made enough money to keep the next couple of generations in the middle class. I hadn’t visited Holyoke since I was a little girl, going to visit a very, very old woman known as “Cousin Caroline.”

Passing through Holyoke, I could see why it was a place you could make money back in the 1880’s. Holyoke is on the Connecticut River. I could see a dam, canals, evidence of water power, and more abandoned bricked-up factories than I had ever seen in one place before, even in Chicago: streets and streets of them four stories tall, many with the high windows that indicate that people worked there before cheap electricity was available for lighting – not just along the river and the canals themselves, but off into the distance. Factory after factory! It was a shocking sight. Far too many to turn into artists’ lofts or non-profit offices.

In Viet Nam, farmland is being claimed by the government through eminent domain to be re-dedicated to industrial parks. In those industrial parks, the jobs of Chicago and Holyoke, Massachusetts are starting up in brand new metal-roofed buildings with huge parking lots, filled with workers and the sounds of machines. It’s as if a giant hand has lifted up the economic activity of one region and planted it down somewhere else, fourteen time-zones away.

But the land where your job went was not empty.

In Viet Nam, 55.7% of the labor force is still in agricultural production. Starting in 1986, which is when doi moi began, an average of 70,000 hectares of land per year have been claimed by the government to be used for industrial development. Every hectare that is taken is estimated to take 13 farmers out of farming. That’s near a million farmers per year (70,000 times 13 = 910,000). These are people who have been farming for hundreds of years. They bury their ancestors on that land. What are they supposed to do? A few, of course, work in the new industrial zones. A lot more migrate into the cities where there are more factories. However, over 68% simply have remained jobless.

Nguyet’s research will be “actor-oriented,” grounded in the idea that “the reality of the insider is what counts.” “The powerful outsider assisting the powerless insider is present in many interventions aimed at the powerless,” she says. She is looking at what supports the ability of insiders to exercise agency and how this is constrained or enabled by sociocultural factors.

Job loss or land loss: the shock impact is equivalent and training is not the answer

In spite of a government program to provide training for displaced farmers, only 18% of the dislocated farmers have received training. In the US, the Workforce Investment Act (WIA) was supposed to gather up people who had been dislocated by trade and provide them with training so that they could get different jobs. But WIA funding was block-granted to the states, got used for other things, mixed up with welfare reform, and basically fizzled out. Not that it would have helped much anyway: factory workers who had union jobs that paid a bundle (including healthcare and pensions) amounting to $40 an hour found themselves scrambling to get trained as nurse’s aides, making $12 – $15 an hour. This is a familiar story.

What is not familiar to us here in the US is the story of what happens to the people who get dislocated by the transplantation of factory jobs to the industrial parks in Viet Nam. The parallels are not industrial worker-industrial worker; instead, it’s between the laid-off industrial workers of the US and the displaced farmers of Viet Nam. These two sets of people, paired by the same economic policies, may have a hard time finding each other.

Dislocation itself is the problem; loss of continuity, loss of history and identity. Naomi Klein wrote about this in The Shock Doctrine.
United Association For Labor Education Annual Conference, Washington DC

The reason I was in Washington was for the UALE conference. Joe and I were part of a session organized by Kent Wong (see photo at top of this post). Kent introduced the overall project; Howard Kling showed his video, which is in progress; then we talked. I now have a list of 17 people who attended the session and signed up to participate in one way or another. Three of them – Don Taylor from Wisconsin, Monica Bielski Boris from Minnesota, and Elyse Bryant from the Labor Heritage Foundation – all indicated that they want to go to Viet Nam, and Michael Maurer is all set up to go there in December 2016. We also got the endorsement of the Viet Nam project in a unanimous vote at the General Membership meeting:

“The United Association for Labor Education endorses the concept of a bridge-building project between labor educators in the US and labor educators in Viet Nam. One part of this project will be building a relationship between the UALE Women’s Caucus and the Women’s Union in Hanoi, initially commencing with a curriculum exchange.”

Friday afternoon, before the general membership meeting, many of us from the conference went down to the Capitol to join the Democracy Spring demonstration. Several hundred young people had walked to Washington from Philadelphia and were holding a week of protests on the Southwest Lawn against corporate money in politics, among other things. Several hundred had been arrested already. We watched while seven or eight more were arrested. The witnesses stood on the sidewalk or on the grass while the protestors, who had been sitting on the street, were handcuffed and led away. The crowd had been shouting and chanting; as the protesters were being handcuffed and walked away, the shouting became singing. Everyone knew the words and the melodies – “We shall overcome,” for example. It was a spontaneous, solemn ceremony with a message of respect and thanks.

This old woman had a beautiful singing voice and great lyrics, including a song with the refrain, “What are we gonna do?”