After the UALE conference I took the train up from Washington DC to Brattleboro, Vermont, to take a look at our little house up there. Everything was fine. 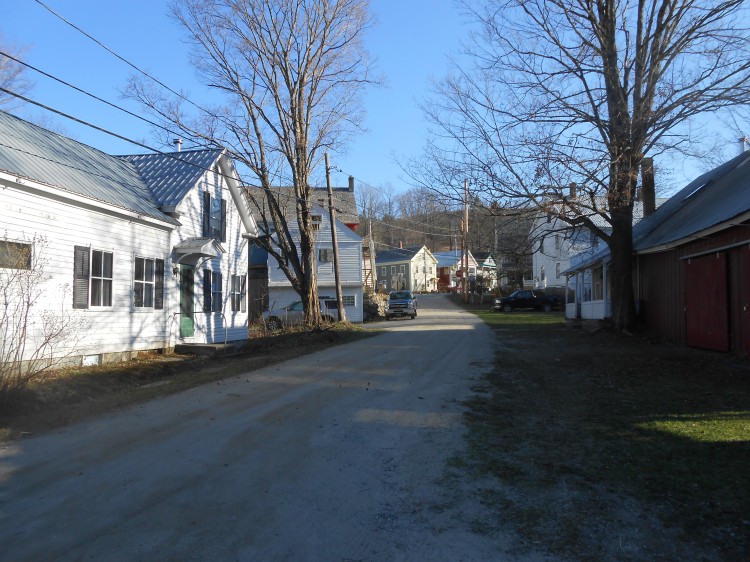 Our house is on the left. The building behind it is the general store (D&K) which faces onto the main road, Route 30.

The town sits in a valley where three rivers come together. Of course, this means there is a history of flooding. You can see it written in the changing patterns of riverbeds. I remember the 1976 flood. I remember the sound of the big boulders bouncing along down the river. Then there was the flood in 2012 when Hurricane Irene came and sat on top of the watershed. 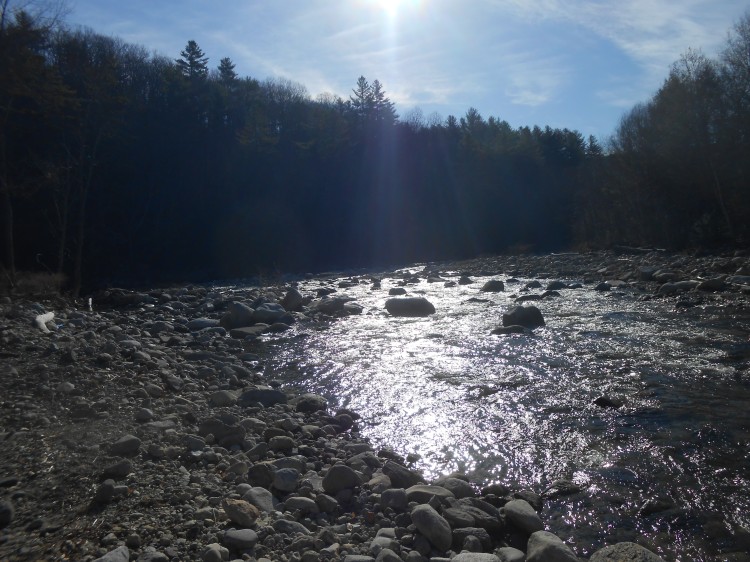 I took a walk early one morning. Here is the place where Ball Mountain Stream  spills into the West River, which is the river that goes through the state park. This is a new vista. Hurricane Irene leveled out the river, cut new curves into the banks, and left boulders sitting in the stream bed much the way a melting glacier leaves big rocks sitting in fields.There are still pieces of metal sticking up between the rocks — half a bicycle here, there a bedspring or a piece of a car, a smashed TV. It’s been three years, though, and people bit by bit are pulling things out of the river and making a pile. For a long time people just didn’t even try.

The flood caused a great deal of physical damage. It destroyed the bridge on the north side of town and wiped out sections of riverbank and road going all the way up the mountain. Long falls of rock still stand exposed along the mountain road. It also took four houses from Back Street –just swept them away. I saw the barn and kitchen of the house across the street from us fall into the water. Someone else who saw the barn fall into the water said it was like watching a candy vending machine: you pull the lever and stuff falls into the tray. Only “stuff” was a washing machine, freezer, lawnmower — all the kinds of things you’d find in a barn.

The flood also cause a lot of social damage.FEMA money from the government came too little, too slow, and with strings attached. Some families whose homes were destroyed simply moved away.  The town had to grieve and repair at the same time, and it was too hard. One young woman who had just broken up with her partner. She and her partner had been working for years on fixing up a home on Back Street. They were both carpenters, tradeswomen. They broke up just as they were moving back in; Tracy was left to move in by herself. Less than a week later, the house was swept away.  Her story became a kind of emblem of the insufficiency of our support system.

Vermont is not an easy place to live. The hills in our area are too steep to farm profitably. In the 1830’s the economy was merino sheep, which was suited to the landscape and caused small farms to consolidate to create big grazing spaces, but when that economy crashed (cheaper land out west) the forests began to move back over the hillsides. The ski industry is now fading as a result of global warming. Vermont is still a great tourist destination in the summer because it’s only a few hours from New York, cool and un-polluted: you can swim in the rivers and waterfalls. People come in the summer to eat fresh local food, swim, play golf at the ski resort, hike in the many state forests. But there are signs all over the place of ideas that didn’t come to fruition, and people moving away.

This is a place I think of as a ghost house. It’s on Depot Street, going down to the State Park. It looks out across a beautiful sloping field which leads down to the river. It must have been a stunning, elegant house when it was conceived and built. The three old maple trees that frame its facade (there’s a stump of a fourth, to the right) indicate the expectations of its first owners: dignity and respect. Right across the river would have been the depot where the train from Londonderry to Brattleboro stopped, so this house commanded the hear of the village. There are not many houses in the village that are three stories and designed and built all at one time. Most of the houses look as if they were built and added onto. This is the case with ours.

My parents moved into this village as retirees in the late 1960s. I don’t remember this ghost house as inhabited at that time. There was a woman in town whom everyone knew whose name was Ann; I forget her last name. She was developmentally disabled. The house had belonged to her family, and when she became the only remaining member of that family, the house was sold to a man named Jack Raymond who had bought other properties in town — nice ones, places with good views and good foundations. My father had conversations with Jack Raymond and told me that Jack understood himself to be a bit manic-depressive, or what we would call today, bi-polar. He would get excited and buy things and then never do anything about it. He was a lawyer from Connecticut; I think he still lives there. At any rate, his plan was to turn the village into an 1800’s New England theme park and rent out rooms in these various properties, linking them together with horse-drawn carriages. None of this came to pass. He got as far in the ghost house as putting in a new foundation, including a foundation for a handball court.

The windows along both sides stand open, but you can’t easily get into the house because the foundation acts like a kind of moat.

Ann was provided with a lifetime residency in one of the houses on Back Street and for years she was a familiar presence in town, taking walks, doing her shopping, going to church. She wore a nice blue wool coat and a hat or scarf in the winter and was very friendly. The house she moved into was swept away in the flood. I last heard that she had moved down to an assisted living place in the next village.

I have always wondered how she felt when she walked past her old home and watched it fall to pieces.

One of the big industries in this part of Vermont now is logging. Here’s a logging truck, the sort that scares the daylights out of bicyclists. 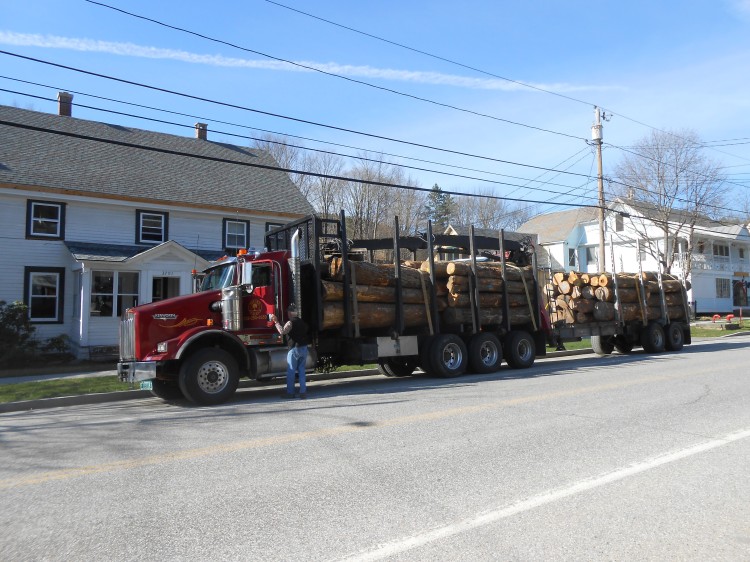 Our house was bought by my great Aunt Polly and her husband Austin Ballou  back in the 1950’s. It was their retirement home. They bought it from the Landsman family (I met Beverly Landsman, who died just a year ago). When Aunt Polly died, she left the house to my mother and her sister Margaret. Then my parents lived there for about 30 years after they retired. When my mother died I took it over. All our family comes from this part of the country, going all the way back to the 1600s. As my father would say, they were teachers and preachers and barbers; not farmers, but village people. On my mother’s side they were in the dry goods business down in places like Holyoke. Now that my brother and his family have moved out to California, where I came during the 1960s, this is my foothold on the east coast. I find that I can sleep through the night when I’m there.

It’s a comfortable, well-insulated little house. We rent it out now and then to cover the running costs. So far, there have been no problems.

One thought on “Southern Vermont Village”