There are two wooden Adirondack chairs sitting out in the middle of the grass, far enough away from the road and nearby houses to feel like an island in the  middle of a peaceful grass pond. In the daytime, I can sit in one of these chairs and hear the river, watch the wind in the leaves of the tall trees over along the road, study the clouds and follow birds that flit from the telephone wire to the tops of the apple trees or flap honking across the sky way up high.  On either side the mountains, South Hill and the hill called Worden Road Hill, rise up steeply; that’s why the river is where it is.

Last night  we came back from a movie in Manchester (“Maggie’s Plan,” exactly as advertised, a serious romantic comedy, with Greta Gerwig) and I went and sat in one of those chairs and looked at the stars. Despite the streetlight over by the road — it’s a new LED light and focuses down rather than glowing all around — it was possible to look up and get lost. I have never — not since I can remember, anyway — lived for long in a place where you could really see the stars. On a few camping trips I’ve been too tired to stay awake. I climb into the tent vaguely aware that something amazing is going on up above. But here I can lean back in this wooden chair and just stare and stare. I don’t know the names of what I’m seeing, and I wish I did. I can see the Big DIpper but which of the stars that the handle points to is the North Star? I should know that. I could see the Milky Way, though. My grasp of the Milky Way is basically what’s on that famous T-shirt, “You are here.”

We have been here a little more than three weeks. I am starting to calm down. Days consist of yoga, breakfast, reading, email, writing, email, lunch, a bike ride — often up to Pike’s Falls – reading, writing, dinner, reading, maybe watching Borgen or Outlander, reading, bed.  In the middle one of us goes next door to the store and buys something, a bottle of wine, a newspaper, some kale. Once or twice a week we drive to Brattleboro. On Friday nights we go to the Townshend Farmer’s Market where we see people we know, meet people we don’t know, and eat great pizza cooked in their stone outdoor oven. Sometimes LInda and Roger have their stall up, selling Abenaki jewelry and art goods. Usually Albert Litchfield III is there, too – he makes everything, from laundry soap to mosquito repellent to vinegar, and also sells eggs, bread and ham (from the pigs he raises out among the stacks of wooden picnic tables that are his main income). On Tuesdays and Thursdays we go to the Jamaica library, a white clapboard building behind the church, with a lively children’s room and a peaceful, high-ceilinged reading room full of old and new books.

We are working on the organizing and collective bargaining handbook for VInh, a popular education gathering in San Francisco on July 8 and 9, a session for Local 2121 to prepare members for a strike in the fall, and an event for our friends from Mexico, Maria Theresa and Arturo Ramos, who will come at the end of July and can present a close-up, comprehensible picture of the crisis in higher education in Mexico. 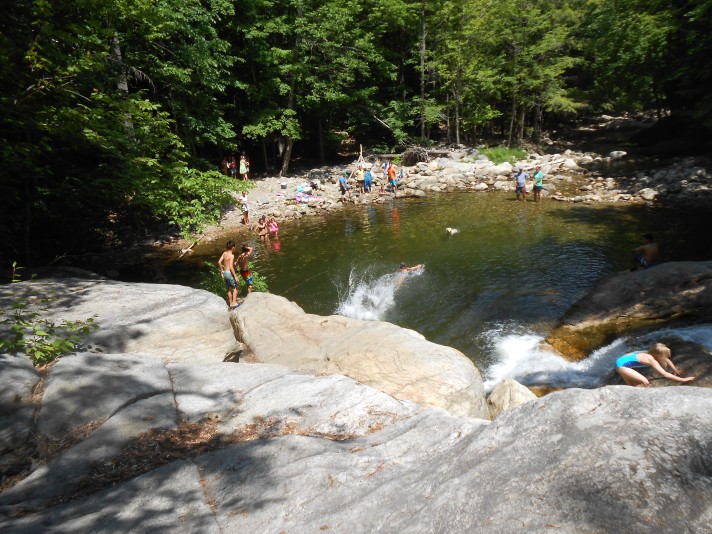 PIke’s Falls on a sunny Saturday afternoon. There is no sign; you park near where you see other cars, and find your way down a steep path. On the weekends, the people are a lot of out-of-staters. The sun is very hot and the water is very cold; the best.

In Vermont I am able to read long books. I have read the entire Robert Frost collected poems from 1930, Michael Chabon’s Telegraph Avenue (not great), and a good book called The Theater of War. I am deep into Elena Ferrante’s Neapolitan Quartet. I have finished the first two volumes. She and her main characters are my generation, born in 1944 (I was born in 1943), children of WWII, only in Italy. It’s shocking to recognize how closely my own story runs to the story she writes. The assumptions behind the power of men over women are perfectly familiar to me, as are the assumptions about what the paths for girls to security and success look like. Who would believe it if I said that a girl who goes to Harvard as a freshman in 1961 will have an experience of male hegemony, both intellectually and physically, not that different from the experience of a girl from the slums of Naples?  I think most of today’s young women and men would find this inconceivable. I do not plan to list moments from my own experience, and the experience of other girls of my generation, that substantiate this claim. But how about this: When I was at Stanford on a Stegner Fellowship (a big deal), a New York literary agent offered to represent me and one of the things we did was choose a man’s name for me to use as a pseudonym. This would have been in 1966-67. If I remember correctly, all the names I proposed (I sent her a list) were very Jewish: Moses this, Simon that…By the time  my first novel was going around in the late 1970s’, it was under my own name.

This morning, having finished the second volume of Ferrante’s quartet, I opened the next book I had on my list, a book I had ordered from the library soon after we got here to be my “long book” for this month: Gibbons’ Decline and Fall of the Roman Empire.  The volume I got was a 1952 Great Books of the Western World edition, and on the inside cover there was a list of all the other books in the series. Fresh from Ferrante, I read the list as if I was turning over a rock and finding a complete and perfect but dead insect: all men. Every one of them.Not Sappho, not Jane Austen, not George Eliot, not Virginia Woolf.

I reacted in two ways The first was a flashback, the second was shaped by having spent the last week reading Ferrante.

The first felt like being back at Harvard in 1962, walking around among the men, the men’s buildings, the men’s statues, men’s clubs, men’s books and equipment. I felt unemotional acknowledgement, like arriving at a building and finding all the doors locked; it’s closed, it’s after 5 pm, of course. Well, never mind. Not anger, which might suggest that things could be otherwise. Just, “Oh, these are men’s books,” period. Not a hint of thinking that the category “great books” might not be synonymous with “things men wrote.”

My second reaction came a moment later, when I read the brief introduction, giving a quick overview of Gibbon’s life. It was written in a distinctively accessible, even chatty style, as if the author was speaking about someone he had known personally, a slightly troublesome but amusing second cousin, and sharing this private view with us, his privileged listeners. The emphasis was not at all on the labor required to produce this monumental history. Instead, it was on Gibbon the person, “unprepossesing,” under his father’s thumb, disliked by Boswell, a member of the House of Commons who never spoke once (although it was during the American Revolution) and holding a sinecure with the Board of Trade and ultimately, unable to “maintain his life in London” he “arranged to live in Lausanne with his life-long friend, George Deyverdun.” “Life-long friend” is 1952 code for gay, which probably has something to do with the tone of the piece, which to me, today, seems smug. But if I had read this at the time it was published (and by the late 1950’s I was likely to do that kind of thing, just like the narrator in Ferrante’s novels), it would have been code that I could not break. I would have felt confused by the tone of the article. Why was everyone having a snicker about Gibbon? But that snicker  had power; it created an in-group and and out-group, unless you could break the code — or unless you were one of the people who wrote the code – you were not in the club of those who knew. I am now thinking of Elena’s experience in the third Ferrante novel, when her own novel is meeting her first critics and readers.

Now, from reading these novels,  it is as if the door that I had found locked was a glass door, not a giant oak or bronze door the way they are in real life: it was glass and I could not only see through it but I could see it. The glass was something in itself, something that could be looked at. It had shine, smears, discolorations, depth. I suddenly realized (this is all this morning, while I’m sitting on the deck in the bright sun, with cornbread cooking in the oven and Joe getting out the apple butter and honey) that it was reading Ferrante that had enabled me to actually see the glass itself. In her novels, the glass is always present in the perspective of the narrator. The narrator carries the glass with her and sets it in front of her when she describes a scene, whether its swimming in the sea, riding the bus, working in a shop, getting married, having sex — everything. The glass, thick and heavy, compressed out of the power relationships between men and women, is never pulled away. Not that she talks about it directly. She just makes sure it is always right in front of us. Through it we see clearly the busy, terrible and courageous actions and we hear clearly the intense, pivotal conversations of her multitudinous characters. Yes, sometimes the glass is darker and gives us a darker picture; sometimes the glass is colorless and hardly visible. But it is never missing.

If you spend enough time in her writing, you can produce that glass yourself and use it to look at things with. That’s what happened to me, unawares, when I read the introduction to the 1952 edition of Gibbon.

I have bought and started the third volume and will read it on the plane going back to California next Saturday. We’ll have Isabelle and her friend Chloe with us. They arrive tomorrow, on the train from NY after a week exploring Manhattan and staying with Chloe’s aunt and uncle who have an apartment there. 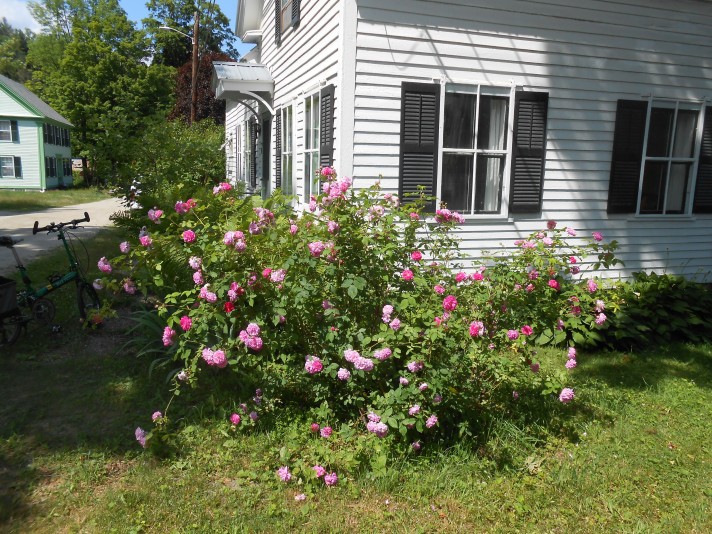 I trimmed these roses when I was here in April, when everything was gray and leafless and pretty grim. I cut them way back and pulled out all the dead stems. Now they’ve gone crazy. This is the most bloom I’ve ever seen on them. They smell great.

I sleep better here than anywhere else. Look at these beautiful eggs!!!

One thought on “A Good Night’s Sleep”