There are protests all over the country, but it’s not clear how well thought-through or coordinated they are. Many are anti-Trump but not pro-Hillary. The peaceful ones are about immigration, Black Lives Matter, and climate change.

There are also clusters of violence. I’m getting emails from the University of Illinois offering “safe” discussion group locations and a hotline for reporting violence or bullying. Today there was an announcement of cyber attacks on the U of Illinois email and website, and it is true, my email is acting funny. Friends on other campuses have told me about attacks on women wearing a hijab, vandalism, etc. The attacks are not pro-Trump. They are expressions of rage by people who  now think that they have license to behave like Trump. If the President can be racist, misogynist, insulting, and encourage violence (like assassinating Hillary), so can we.

A lot of the elite media (Washington Post, NYTimes, New Yorker) are publishing somewhat conciliatory opinion pieces. As in, “It’s not so bad, he seems to have a transition team of fairly moderate Republicans, etc.”

Locally, the candidates that we supported won. Jesse Arreguin will be the next Mayor of Berkeley, beating the well-funded  Laurie Capitelli, the apparent heir. Sophie Hahn will be the District 5 rep on the City Council. Most satisfying was the election of a young black woman, Shannell Williams, to the Board of Trustees of San Francisco City College. She was a student leader at the time that the accreditation attack began and has remained active and vocal all through the fight. She won with more votes than any candidate for the Board had ever received.

The top California legislators publicized a defiant statement promising to protect Californians and the rights and freedoms that we have here. They put it out in English and Spanish. This is specifically related to Trump’s threat to deport people but it is also more general:

The petition to secede from the United States is going around and getting a lot of signatures. The inside front page of today’s Chronicle had a long article supporting it. California has a Democratic governor, legislature and Congressional delegation, and went for Hillary 65% overall, 70-80-90% in the Bay Area.

Where is my community?

The neighborhood we live in is very white.The whiteness of my neighborhood makes me nervous. I have to go downtown Berkeley to even see a Black person.  Oakland, however, is mixed. (There is a big fight going on over gentrification in Oakland, which would price out the multi-ethnic and African American neighborhoods.)

A lesson that is coming home to me because of this election is that I need to find my community and get more involved in it.

Yesterday, Friday, Joe and I went to an exhibit at the Oakland Museum celebrating 50 years since the founding of the Black Panther Party. I went in hopes of seeing something that would help me understand grassroots organizing. It’s is a powerful and well-designed exhibit. The Black Panthers emerged out a redevelopment project that leveled an old Black neighborhood in Oakland, replacing it with office towers. It coincided with the Viet Nam War where disproportionate numbers of young Black men were sent to die fighting. The Panthers did deep community organizing, armed themselves, trained and scared the daylights out of white people. Their organization had chapters all across the country. Many of their leaders were jailed and shot. 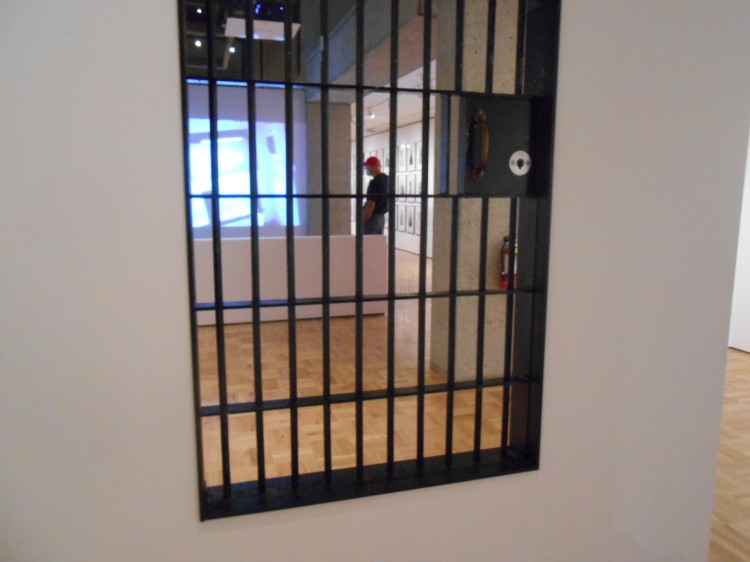 The long videos accompanying the exhibit are especially good. So are the galleries with the blown-up FBI files on the wall.

One lesson that applies right now, from the Black Panthers, is that they had a program. They weren’t just doing whatever came next. They worked out a 10-point program. In the exhibit, the actual sheets of yellow legal pad paper with corrections in pencil are arranged in a glass case, under a big wall on which the whole program is written.

The other lesson, which is more obvious, is that the kind of community organizing that they did involved intense, detailed planning and many, many people — all kinds and ages of people.  They had not only their famous breakfast program for kids; they also had medical emergency services and transportation, a newspaper, assistance for old folks, home repair collectives – the exhibit includes a “how to set up a plumbing repair service” booklet.  And of course they had their military drills, which were on the one hand a form of public dance and on the other hand real self-defense program, with guns and ammunition. Some of the most famous photos of the Black Panthers show them walking into the California legislature with their rifles.

We were there on Friday evening when entrance to the Museum is free after 5. Coming out of the exhibit, we heard music and found the main  foyer where there was a sound system and stage, long tables for eating, and a full bar. People — whole families – were dancing under the lights in the entrance. Up on the street a line of a dozen food trucks were selling wonderful food. Little kids, babies, old women, old men, couples, all colors and ethnicities mixed up together. You could see the direct line of descent passed down from the Panthers. I thought, “I’m glad I’m here.”

Only a few blocks away, last night there was a protest with people burning tires and garbage in the middle of the street.

This picture was taken early, before the crowd got really big. But you can see people dancing and eating.

Trump and TPP: Why trust him now?

Questions from friends in Viet Nam are about TPP.  I wrote back to one of them, forwarding a typical anti-TPP message, this one from Tim Canova at Progress for Change:

But let this be a wake-up call.  There is no time to waste in organizing against the Trans-Pacific Partnership, the disastrous corporate giveaway that the political establishment may still try pushing through the upcoming lame-duck Congress.

Some Senate leaders have indicated they may not bring the TPP up for a vote in the lame-duck Congress.  But now is not the time to trust in their sincerity or to let our guard down.  We must put a stake through the heart of the TPP and the anti-democratic agenda that it represents.

If passed, the TPP will outsource millions of our service jobs, raise prescription drug prices, endanger the open internet, and undermine our food safety, health and environmental protections.

This is the US progressive left-wing moderate argument against TPP.  As you can see, there is nothing in it about freedom of association, independent unions in Viet Nam or anywhere else. People in the US do not know anything about the Viet Nam labor side agreement. To us here, TPP is all about being a “corporate giveaway” that will send US jobs to low-wage countries and will allow corporations to sue countries and governments for “loss of future profits.” Bernie’s post-convention group, OurRevolution, calls for celebration of the death of TPP: “Dead in the water.”

Trump changes his mind whenever he thinks it will make a good TV photo-op moment or tweet. Since TPP is good for corporations in the US, it is very likely that Trump will change his mind about it and support it. The Clinton emails released a couple of weeks ago show her staff trying to figure out how to shift to respond to anti-TPP pressure from Bernie and they sure don’t sound committed to the new position. Would she have stuck to her position if she’d been elected? Probably not. On this one, Trump probably won’t either.

It’s important to un-link freedom of association in Viet Nam from the current version of TPP. I personally agree that Viet Nam needs active, fighting unions in order to push back against FDI (foreign direct investment) companies. If the VGCL can re-make itself to accomplish that, great!! After all, it has a powerful history of being able to mount and carry on fights, going back to the French and the slavery conditions in the rubber plantations. But now I have been told that 90% of the people working at the VGCL are doing Party work, not organizing among workers. We in the US have plenty of similarities to this. It is very hard for a big bureaucratic union to re-create itself. I can not think of a single example from the US where a big, bureaucratic union  has been successful at re-inventing itself. Sending people who have spent 20 years at desk jobs out to salt in non-union workplaces? Look at the big breakaway in 2005 when SEIU, IBT, UFW and UNITE HERE left the AFL-CIO supposedly to re-create themselves as “organizing” unions. Some success, yes, but far from what we hoped for.

I think that the form of unions proposed under the TPP side agreement is a good start, but has to be re-designed according to Vietnamese culture and history and values. The good thing about the side agreement is that it frees up grassroots level unions to self-organize and fight back against employers, which in the long run will bring wages up in Viet Nam and make Viet Nam less attractive to corporations that want to go low-wage. So if freedom of association produces grassroots fighting unions that drive wages and working conditions up in Viet Nam, fewer jobs from the US will relocate there, and that will be good for US workers. But that is not part of the discussion here in the US. Also, it is a long shot and no US worker who is trying to figure out how to pay next month’s rent and groceries is going to be impressed.

Right now, the Republicans are saying TPP is not going to come up. Here is a link to a conference in Ho Chi Minh City for Nov 14. Note the segment on labor law:

Boiling it down to three points

I think I can summarize what has happened in three points:

The pain: People voted, as they say, with their middle finger. They are angry because their real life conditions are insecure, bad and getting worse. They see the rich getting richer. They feel like they are on a speeding-up down escalator headed toward a trash compactor. They know it’s a lottery, and they’re mad. These are the consequences of inequality. It’s not the objective conditions of someone’s life that produce this anger. Poverty, in a country where people are more equal to each other, does not in itself produce this sense of outrage. You can be content and live well on little, but not if you are being constantly tormented by incentives to consume and the sense that you are being publicly shamed and robbed. That causes pain, and a healthy response to pain like that is anger.

The popular vote: Hillary actually won. But that doesn’t really matter, and not because it doesn’t make her president. Even if the electoral college were not a factor, and if she became president based on the popular vote, we would still be looking at a country  divided against itself and boiling in a fever of fear and resentment. If Hillary had won, the voices of those people probably would have been silenced, at least for the time being. They would have been scattered out into a few million individual voices. Cranks, wackos, Fox News types. But with Trump winning, those voices have made a collective point. Now the two sides can see each other in the light of day. Take a good hard look: this is us.