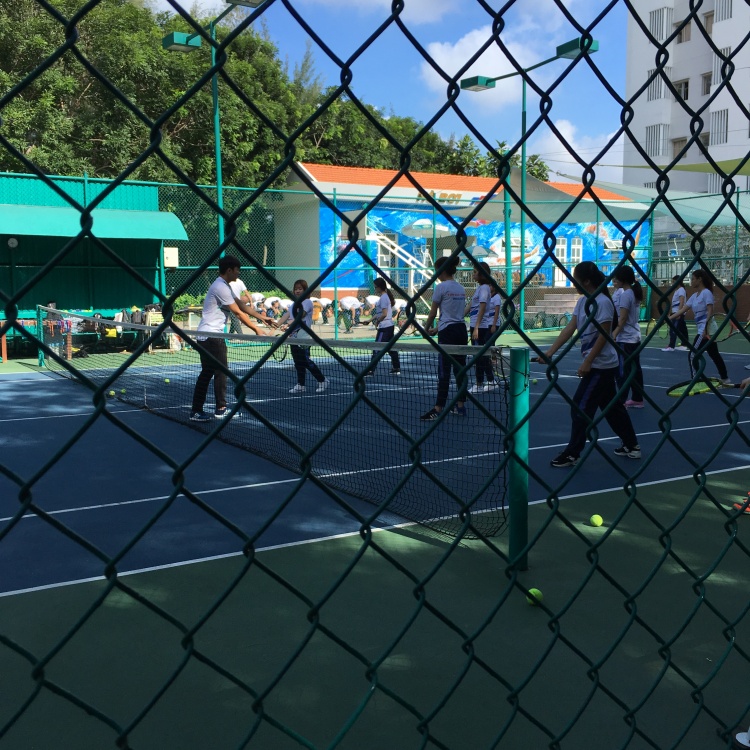 The semester starting at TDT is like a huge machine coming to life. Outside our door starting soon after 6 am there were classes in the swimming pool, tennis classes, something else in the background, martial arts in the gym. Lots of mothers sitting on the benches while the young students found out where their rooms were. Suitcases were all over the place. The cafeteria ran out of food — nothing left but eggs and bread! Next to our room is the copy shop, which was going great guns into the night; I could hear them pounding the leaves of whole books into glue-backed covers, boom boom boom! and can vouch that they go home at midnight. Our classes will be huge — Joe’s is 70 but the first day it was 45, mine was supposed to be 99 and was 82. 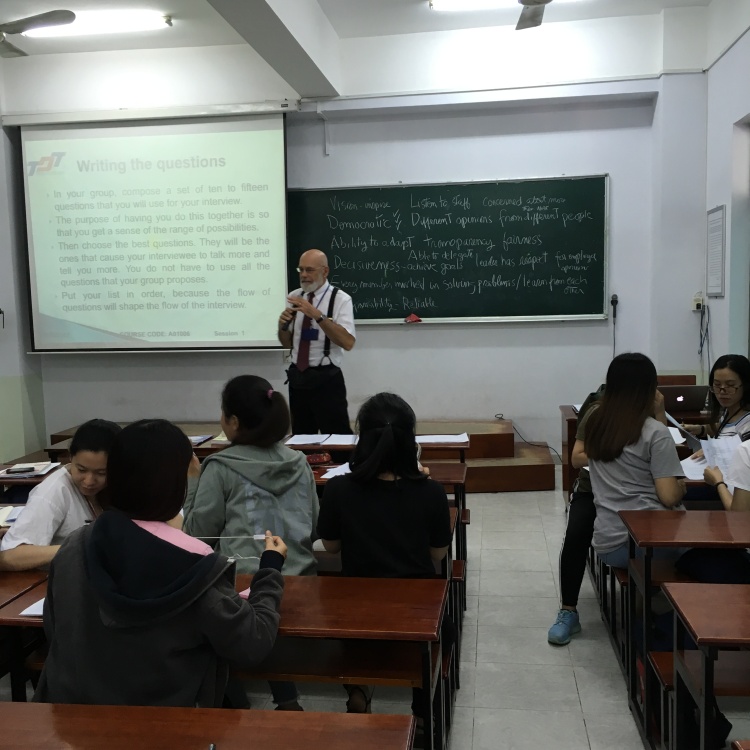 Joe’s first class, on Tuesday morning, went very well, after the technology got set up. About 45 students showed up, overwhelmingly young women.

As an exercise he asked them to make a list of the characteristics of good leadership. the winner above all was “democracy” or “democratic.” We didn’t actually expect this. Hmmmm. Things are moving along.

Vinh translated for both of us. There were two microphones. She stood in the back of the class.

My class, today, also went well. I’m using Katz, Kochan and Colvin’s Labor in a Globalizing World (I think I’ve mentioned this before) and trying to get students to focus on “Who is ‘us'”?  WHo can act? Who judges? Who enforces? And follow those questions through the various IR systems that we study. We will start with trying to understand the work experience of the elders of some of them. There were 82 students in the class, who formed into 13 groups. Here are some pictures of them doing the first group exercise: figuring out what else is produced at a workplace other than the product — things like jobs, benefits, a place to meet people and make friends, a way to make a decent living — etc.  The idea was to make the maximum list, then divide it into things that workers want and things that employers want. 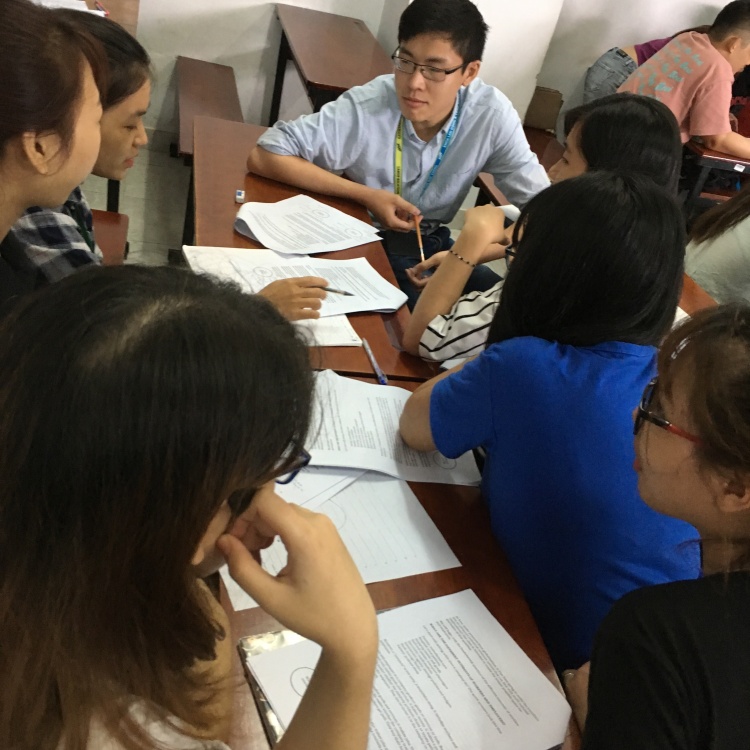 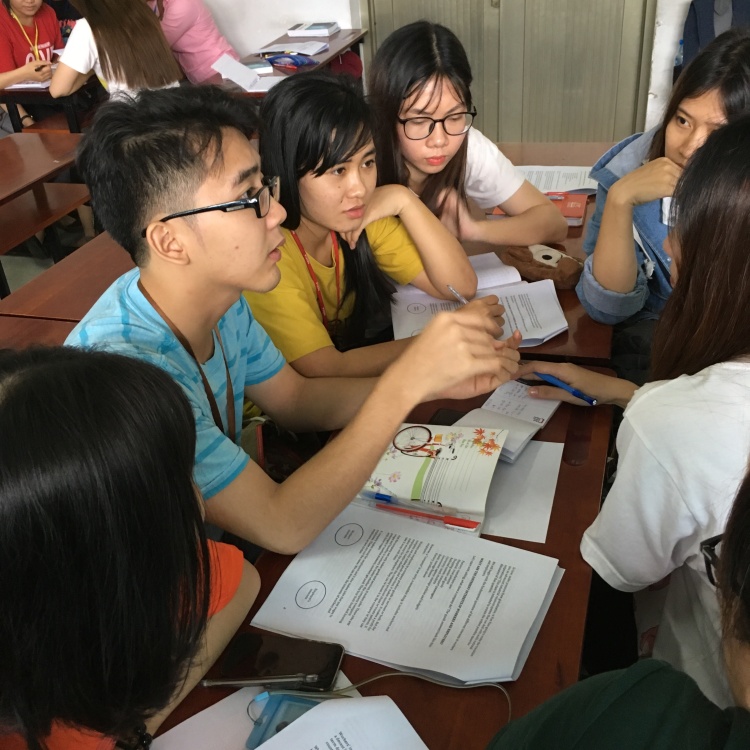 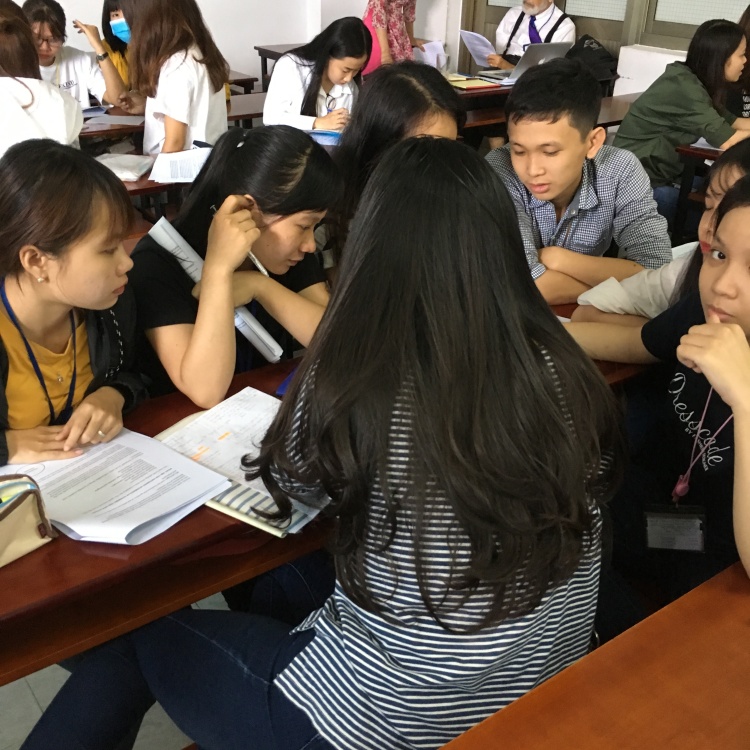 Then they went up to the board and sure enough, they got it!! 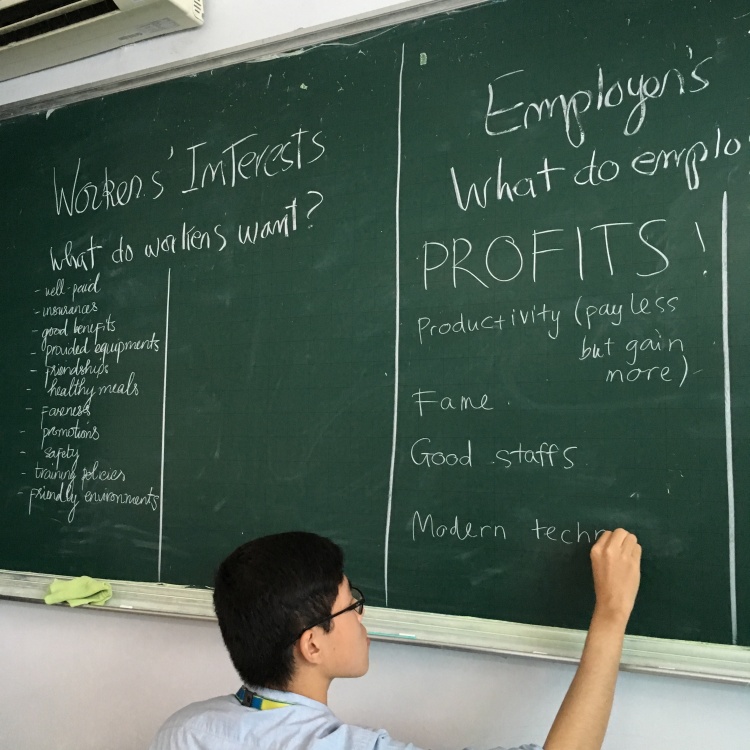 We drew lines from things on the “workers want” list to items on the “employers want” list, and back again, to show how come things are a shared concern — things like training and health and safety. But wages and profits did not get a connecting line. A good job is a place where there is a lot of overlap. In a bad job, anything from slavery on up, including some of the bad workplaces in Viet Nam, there is little or no overlap. Very little of what workers want is also wanted by the employer. My argument is that labor wants the maximum number of their needs to be negotiable — to be in the “labor peace” zone, where the two lists overlap and you don’t have to be fighting all the time. When the way these issues are handled are settled through negotiation and agreed to in some enforceable way, there is labor peace. Workers want that because they want to have steady jobs and a decent life. Employers want it too, but not if it cuts into profits, so unless labor takes up some of its economic weapons, everything but profits will go by the way. So what are these economic weapons? Both sides have them, and they can use them to manage the size of the zone in which there can be labor peace. Sit-ins, strikes, demonstrations, lobbying, political leaders, public shaming, going to court, showing solidarity — these are the weapons of labor. On the employer side, capital flight, lockouts, layoffs, replacement of workers with automation, and then individual penalties like demotions or suspensions.

Now we can talk about the way countries develop IR systems to regulate the conflict between workers and employers over these issues.

Their first assignment is to interview an elder worker and see if they can understand his or her work experience using the questions, Who is ‘us’? Who can act? Who judges? Who enforces?

We’ll see what happens. These students are very sharp. Also, I notice that they come to class with pens and notebooks. This is new. Two years ago, students didn’t take notes; they had phones but no note-taking equipment.

Wednesday after my class we went swimming (pool open for lecturers from 5-6 pm) and then took the 86 bus into center city, the Ben Than Market. I had heard abut the diggings for the new Metro but what’s going on there surpassed my imagination. It’s a vast mess, but the Market is still there. We at dinner on a balcony at a Hue Food restaurant up an alley  overlooking the market. On the way home in a cab I began to have a very sharp sore throat, which I attributed to the pollution, but it turned out I was actually sick and spent the next 36 hours on my back in our room, sniffling and feverish. Vinh brought oranges, Ensure and kiwis and some kind of Vietnamese oatmeal. 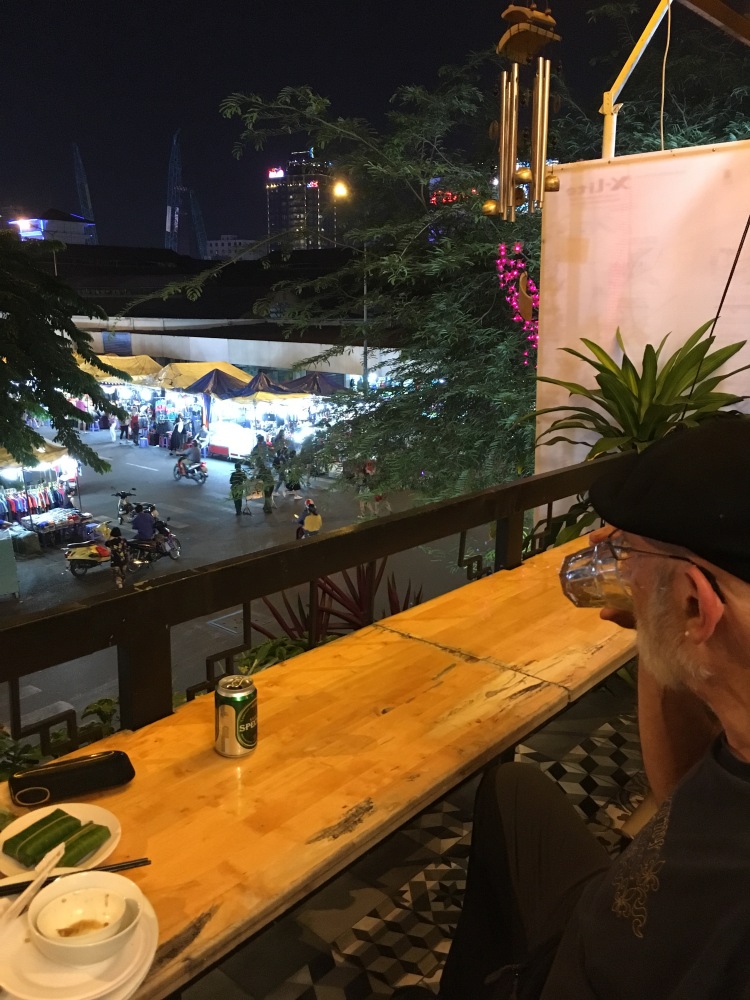 One thought on “First day of semester, August 2017”