In our Journal Club meeting on Monday, when we got back from Hanoi, Dean Hoa told us that his contact (the HR Manager named Thinh) at Hansae said that they enjoyed our session very much, that it was “exciting” and that they have suspended the class for a week in order to allow a new election to take place for union leadership.

We also heard from Jeffery Hermanson that he heard “from the company that they were happy with the training, and from the WRC that they are close to a final agreement.” Amazing.

So now back to our classes. Joe and I each have only two classes left — we leave Viet Nam in a little over 2 weeks.

First, I distributed a photocopy of Lan’s article in the Global Labor University Column, in which she talks about the causes of wildcat strikes.  My point was first to draw the attention of students to the GLU as a place to get advanced education, and second to note that there is an internal discussion going on about the strategic direction of the VGCL.

I have been anxious about whether my students would be able to do the whole country comparison assignment, even though it’s not due yet, so I just put it up on the board and asked to see who could do it. 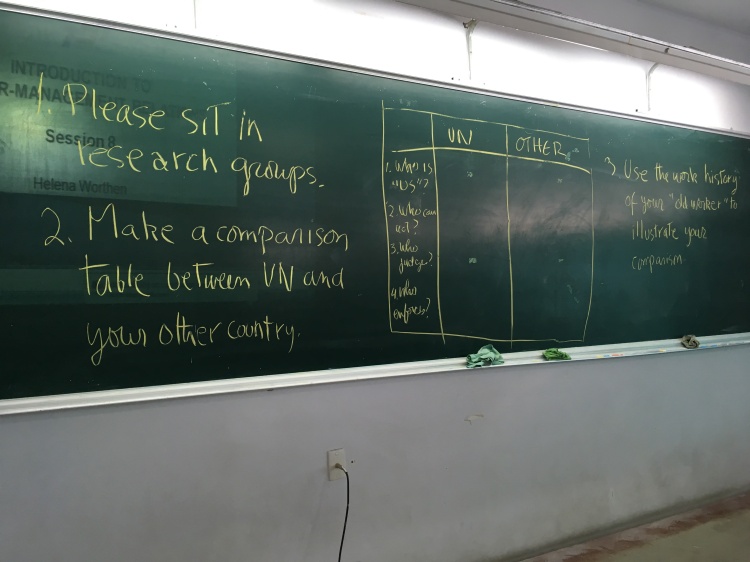 It says: Sit in your research groups; compare Viet Nam and the country you have chosen, by answering the following four questions: Who is “us”?  Who can act? Who judges? Who enforces?  That’s all they had to do today. But for their final submission, I want them to thread these questions through the work life history of the “old worker” they interviewed.

They went at it, drawing tables in their notebooks. 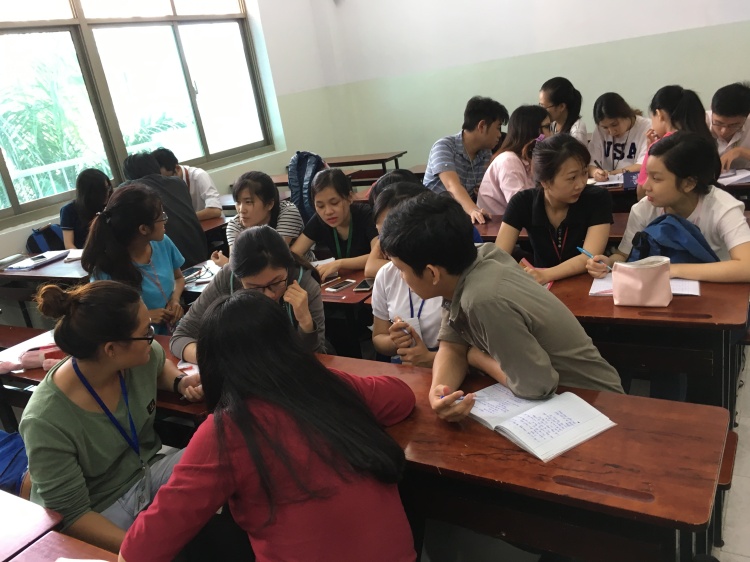 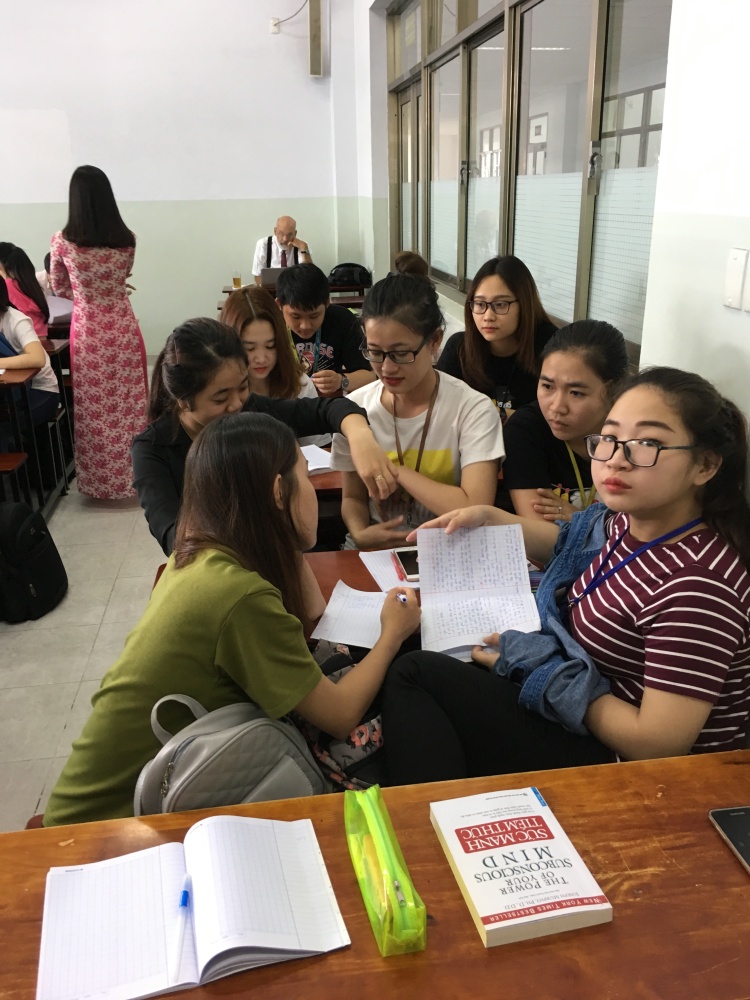 Six groups were able to do the assignment: two had done the US, one did Finland, one India, one Bangladesh and one Cambodia. I cannot comment on whether what was posted is exactly correct, but that’s not as important as the fact that they were able to distinguish different answers to these fundamental questions, and that they could see that countries make their own IR systems out of their history, culture and economic situation both internally and externally. 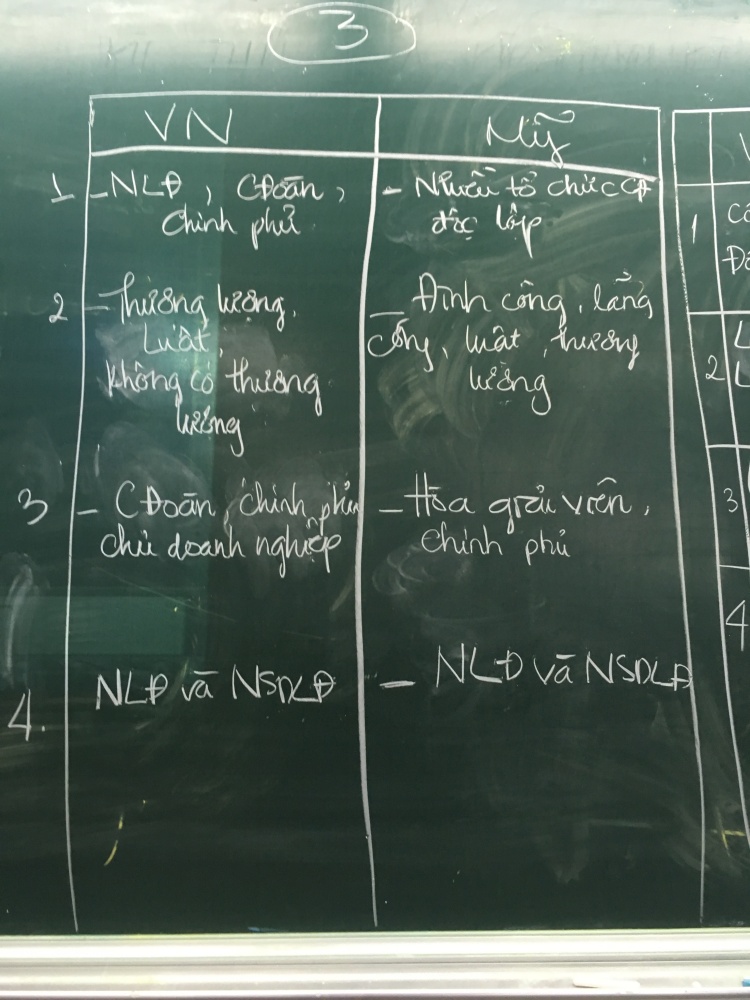 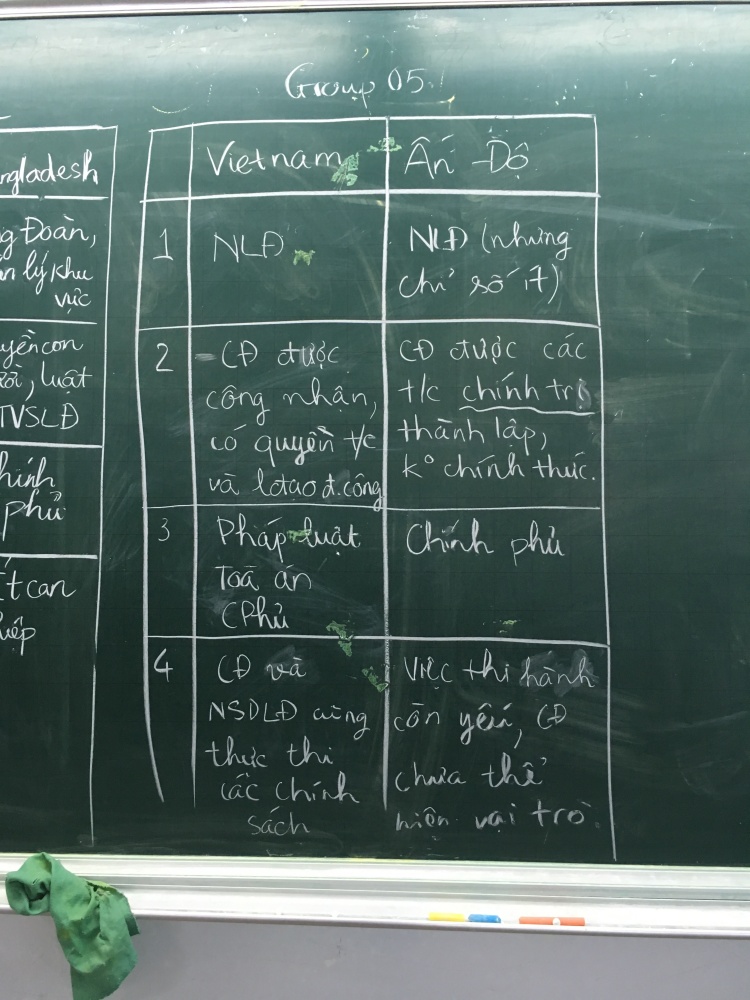 The one immediately below is US. 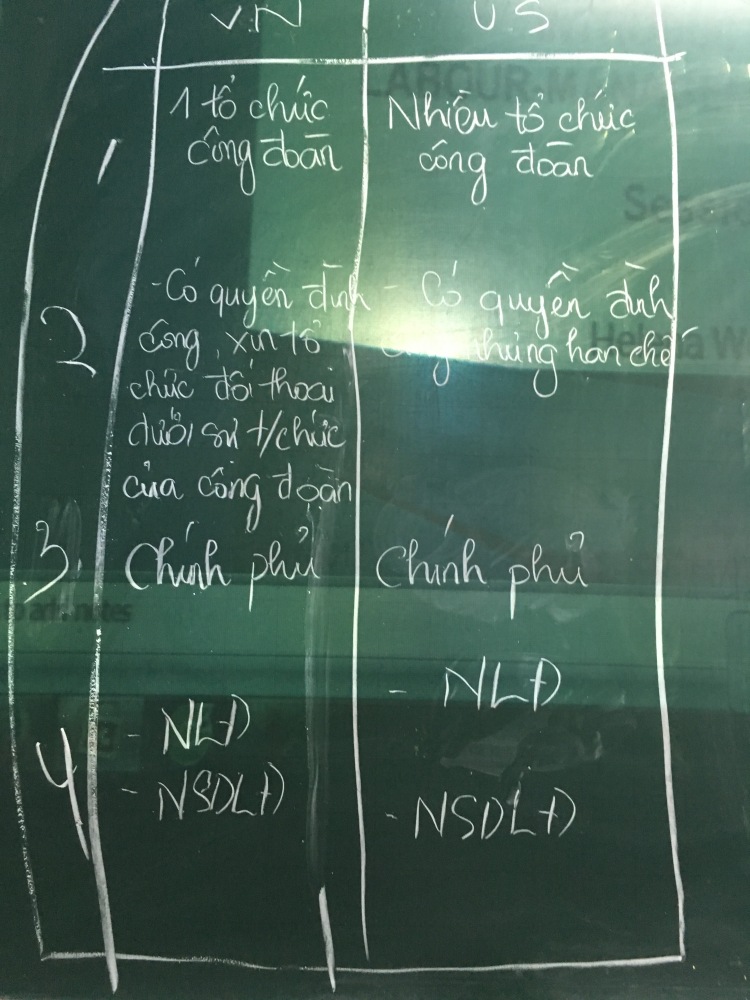 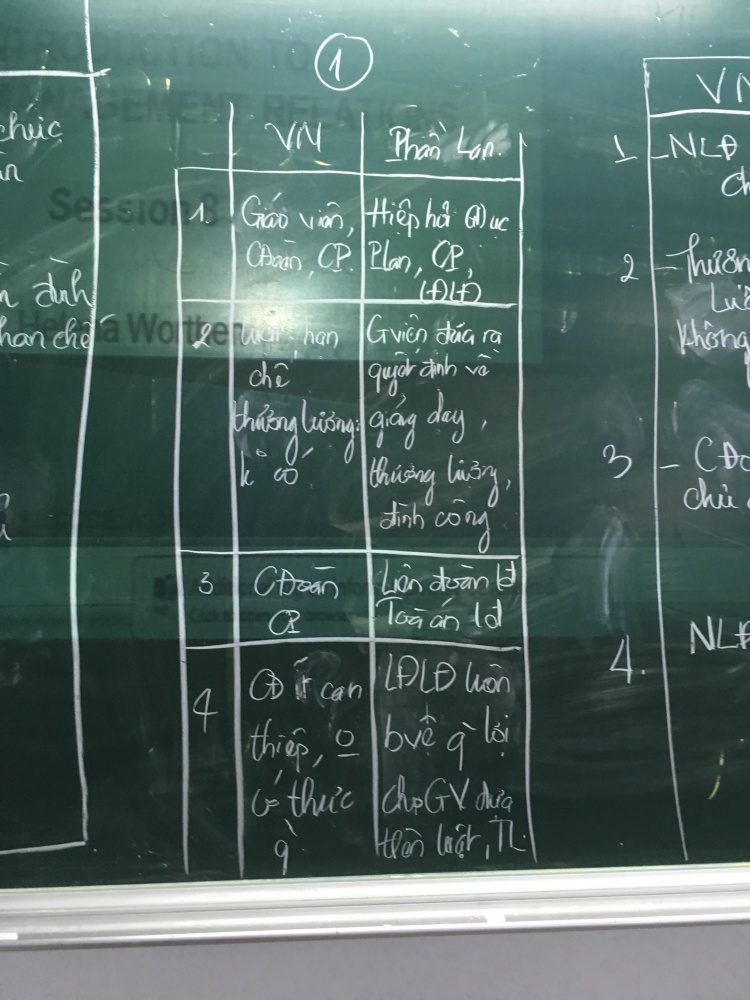 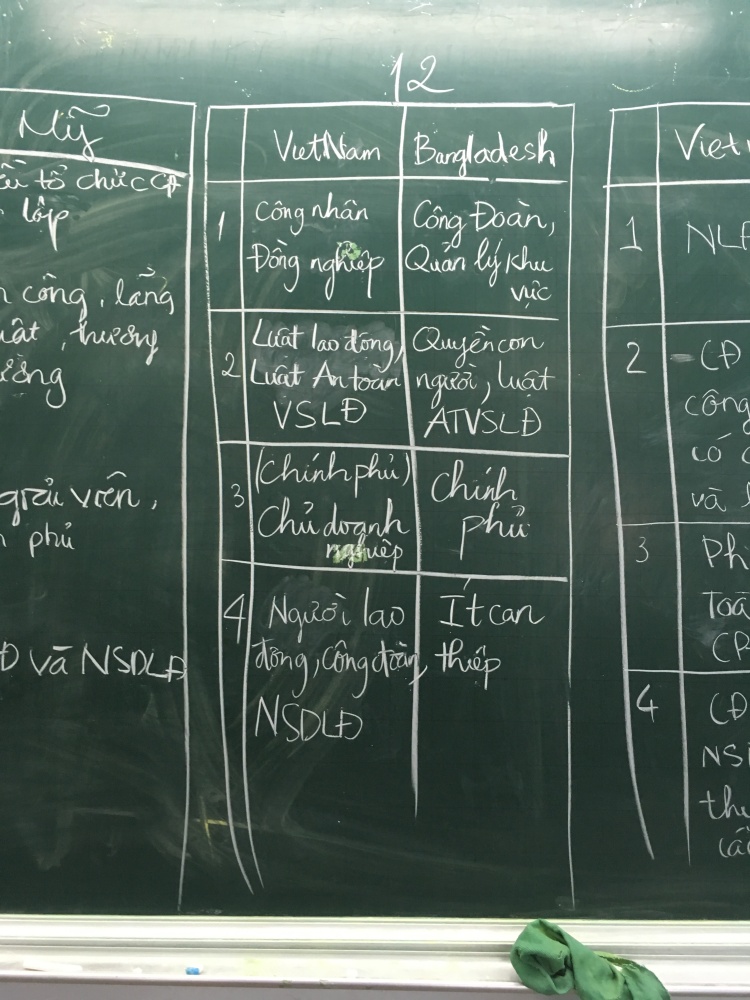 And Group #9 did Cambodia. 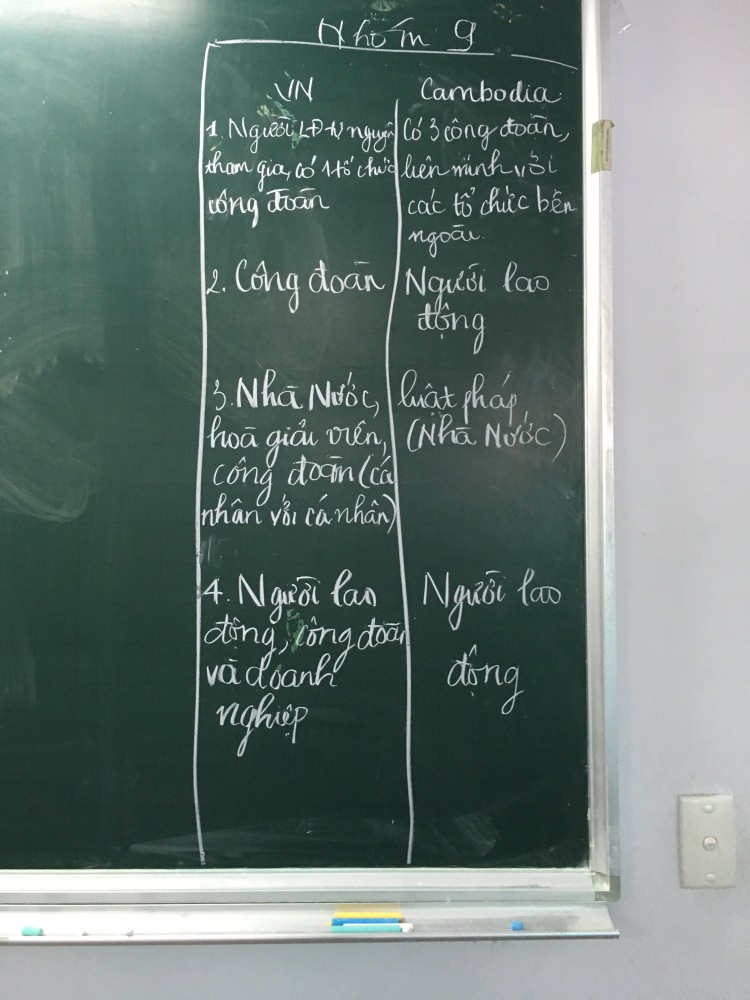 I then asked if anyone could give advice to other students about how to do this difficult assignment. One reason why it is difficult is because my four questions– “Who is us? Who can act? Who judges? Who enforces?” are not answered anywhere, at least no where that I have seen. They are essentially comparisons, from the workers point of view, and as my old boss at Illinois (Peter Feuille) once asked, “Who would pay for that kind of information?”  So you can’t get answers to these by hoping someone will tell them to you. 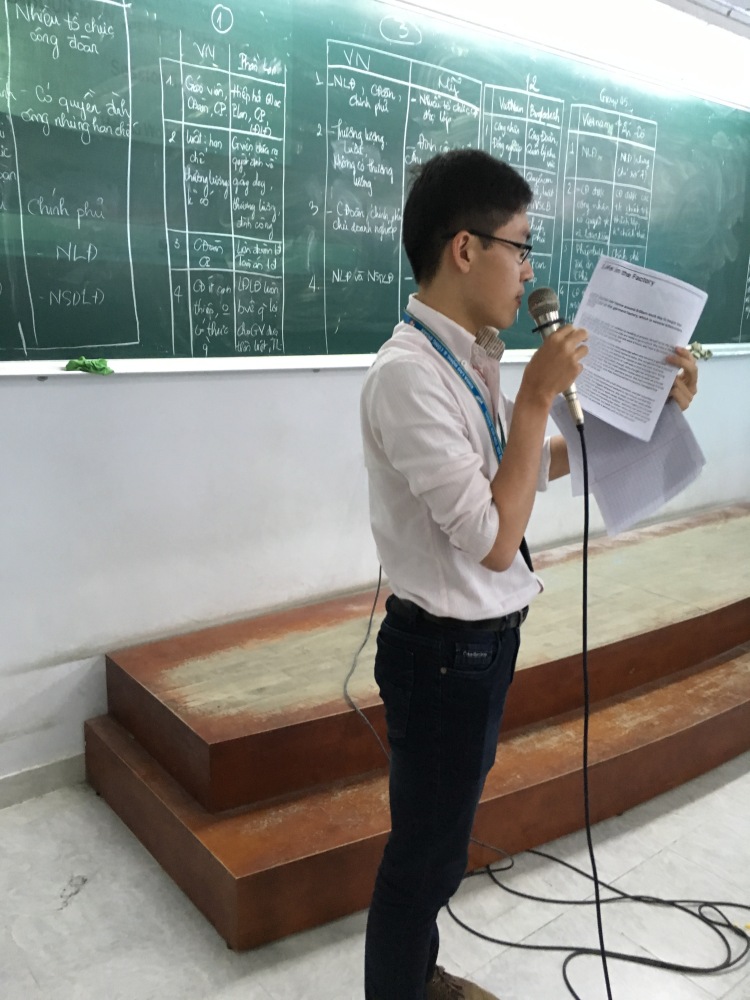 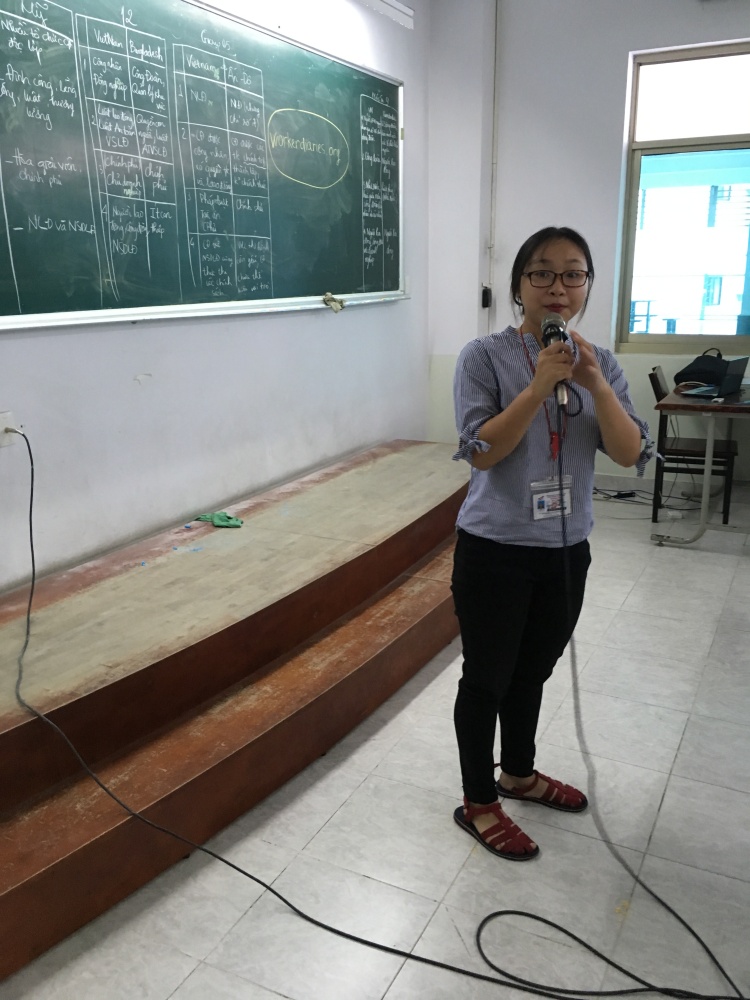 Then, after running through some slides on collective bargaining (we really need a whole class, a whole semester, on collective bargaining) we were going to talk about mediation — because we are following the Katz, Kochan and,Colvin textbook, and their experience is very heavy on mediation. However, mediation happens where conflict happens, and where conflict happens is different in different systems. So we had to go back to the slides from early in the course on theories that frame different IR systems and take another look at the way Katz, Kochan and Colvin describe the “unitary” and “conflict” theories.  The students had to create a new version of the “unitary” theory in order to make it fit with Viet Nam.  I asked them to do this by thinking about what things were like between 1975-1996, and then compare that with 1996 – today, when Viet Nam is open to FDI employers and investors who basically operate by the free market system.  Believe it or not, the students were able to do this — at least two of them. Huy was one and I’ll have to get the name of the other, a young woman, who knew exactly what she was talkingabout.

To sum it up: the mediation that Katz, Kochan and Colvin talk about takes place at what they refer to as the “functional level” of the IR system: where collective bargaining takes place. Mediators are often called in to resolve problems in collective bargaining that are related to communication, information, expectations, etc. In a country that does not have effective collective bargaining, mediation takes place at the workplace level (below the functional level) when specific problems cause a disruption of work and require prompt resolution, and as far as I an tell it is done with an ad hoc committee of local or provincial VGCL, employer, People’s Committee members, and worker leaders. Mediation also takes place at the top level, what the authors call “the strategic level,” where the VGCL interacts with the Party, the VCCI, MOLISA, and other top-tier entities.

I distributed a copy of the Accord that was prepared as a result of the Rana Plaza factory collapse, as an example of mediation at the strategic level. This was referred to in the Katz book but I wanted them to see the whole thing, especially the section on Governance and enforcement.