View from the back of the ferry, crossing from San Francisco to Oakland.

The Minimum Wage conference at Ton Duc Thang took place and, from what we could tell, skyping in, it was a great success. Among the achievements:  posting the papers on a google drive in advance, so that everyone could read them; bringing researchers down to HCMC from Hanoi; the presence of ILO Country Director Chang-Hee Lee and VGCL retired chief Dang Ngoc Tung, and the design of the program to allow above all, real discussion! Many of the papers, but not all, were presented in English. Therefore although a Vietnamese student from SF State happened to be visiting us that afternoon and did some whisper translation, we mostly missed the discussion.

Any discussion in Viet Nam about minimum wage leads to discussions of collective bargaining (which is what pushes wages above the minimum) which in turn leads to discussions of independent unions, “free” or otherwise, empowered to elect their own leaders (not just the Director of Human Resources from the enterprise), such as might have emerged had the US not backed out of TPP once Trump took over. The consistency agreement under TPP would have required Viet Nam to sign the ILO conventions that protect freedom of association.  Thus the presence of key persons from the ILO and the VCGL is significant.

Here’s the google drive in which the papers were posted, followed by the article that appeared in Lao Dong about the conference. The person standing is Dang Ngoc Tung. On the screen in the background you can see Joe, skyped in, many times life-sized. I had no idea we were looming over the proceedings.

After one year of Trump, are we getting numb to the catastrophe? Every day is a new low. Behind the clowning and insults, off-stage, the structure of a government that can do its job is being taken apart.  Odd that this should be the work of an old man; old people are supposed to be willing to do the boring, detail work of maintaining the structure or even improving it, so that something will outlive them. I keep thinking of the man on the 32nd floor — the guy who holed up in that Las Vegas hotel and unleashed a firestorm out the window, onto a crowd of concert-goers hundreds of yards below. Bang-bang-bang, laying down fire. That’s Trump.

So there wasn’t a lot of publicity about this year’s Women’s Marches. I didn’t get any emails or sense anyone doing any organizing. On the morning of the day I googled it and found a website, obviously put up in the last 24 hours, saying where to go and when. We went on our bikes. Joe’s bike cable broke so we spent some time in a bike shop and wound up just standing on the sidewalk on 14th Street in downtown Oakland watching. by then it was about 10:30. People were coming by with their posters and costumes, but it wasn’t a thick crowd.  I thought, “Well, it’s OK, but not as big as last year.” However,  they kept coming. Maybe a thousand, maybe two thousand….maybe more.  And more. Then after a while a row of women in security patrol vests came along in tight formation, shoulder-to-shoulder. I asked, “Who’s this?”  Someone told me: “This is the march.”  All the people who had been coming past for the last hour were the overflow, the people who couldn’t get into the main march because it was full already.  And once the main march arrived, it was indeed huge, as huge as last year. You couldn’t get anywhere near the Frank Ogawa amphitheater; you couldn’t even get into the intersection of 14th and Broadway. Pretty good for no publicity.
Some pictures:

Pussy hats all over the place. I had bought a skein of pink yarn and some needles, but didn’t get started. I wore a pink scarf. 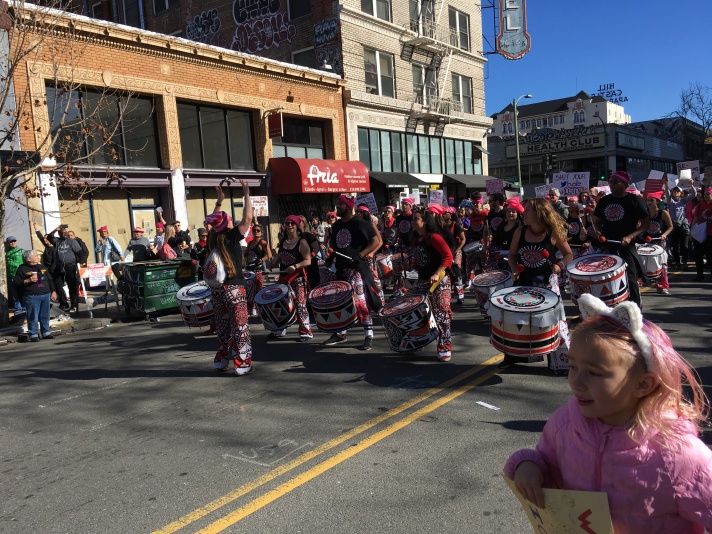 I counted at least seven full bands; this one was all drummers.

And puppets. Most of the signs were hand-drawn, not organizational.

The first wave of marchers were mostly couples, single women, or families like this, with their own signs made at home. In the right rear you can see Joe in his pussy hat standing with our bikes.The second wave, the “real” march, had many more organized groups of ten or twenty or more people.

How the Cal-OSHA Muscular-Skeletal Injury Standard got passed

The reason for this section is to illustrate the role of an independent union in improving the jobs that workers have to do, members or not. It shows how many different resources and activities had to be pulled together to complete each step. It involved workers doing participant action research, union staff strategizing and compiling data, academics using social science methodology to produce peer-reviewed papers, and local union leaders recirculating the findings back to the workers and educating them about how to use the findings to protect themselves. the job of the union, in this example, is not just collective bargaining; although the information discovered and systematized in this process became a powerful tool in collective bargaining (with the Hyatt chain, specifically) that was only a part of it.  Notice that this research was not undertaken by the AFL-CIO, which is the closest thing we have to the VGCL, or the Department of Labor. However, it was done with the help of another government agency, OSHA. But mainly, it was built on the knowledge of workers themselves from doing their work and living with the consequences and carried by the commitment of workers to show up, participate and in some cases, confront their bosses.
The General Duty Clause
The most important sentence in the Occupational Health and Safety Act of 1970 is Section 5(a) (1) that says that employers are required to provide their employees with a place of employment that “is free from recognizable hazards that are causing or likely to cause death or serious harm to employees.”
One thing this means is that there are no acceptable “occupational diseases” or “career diseases.”  “Career disease” is a term I have heard in Viet Nam. If some kind of work will, over time (notice no time limit on how long it takes) cause harm (as in a “career disease”), then it is the employer’s responsibility to fix that situation. The least effective way for the employer to do this is to create rules; the next least is to provide personal protective equipment (PPE), and the best is to engineer the hazard out of existence.
Another important word is “recognizable.”  You have to show that a hazard is recognizable. That means that there has to be a certain standard against which the hazard, whether it is noise, dust, fumes, cold, moving vehicles, explosions, risk of falling, or stress can be measured.  The campaign by UNITE-HERE was to establish a standard for musculo-skeletal injuries so that the types of work done by room cleaners could be included as a ‘recognizable hazard”.
A standard applies to all workers, not just to union members. If you are represented by a union and put the standard into your contract, you can enforce it more effectively, but you are covered whether or not you have a union.
There is a federal OSHA, (Act, in this case) but states can have their own Acts if they are stronger than the federal OSHA.  California is one of those states. The Board is appointed by the governor. The actual agency is staffed by professional health and safety experts. In California, it eventually  needed a change of governors in order to get a more sympathetic Board appointed at Cal OSHA (Occupational Safety and Health Administration.)
What Hotel Room Cleaners Do
Hotel design, at least in the big chains, began changing in the 1990s.  The changes involved big duvets, lots of extra pillows, fancy scarves spread across the foot of a bed, bathrobes — lots of luxury to go along with higher prices. Bathrooms became theaters with elaborate lighting and glass doors on showers. All this meant more to lift, push and clean.
Hotel room cleaners have to pull up 18 inch mattresses, bend and stretch to make huge beds, fluff up heavy duvets, push 400-pound carts through thick carpets and reach high and far to clean bathrooms, many of which now have glass doors, not plastic curtains. They also work under the pressure of time because they are given a quota of rooms to finish with each shift. In the course of this they incur many kinds of muscle strains and back and shoulder injuries. In order to keep working, many take pain medications.
Out of fear of being disciplined, many work through their federally-required breaks. In fact, the UNITE-HERE project included filing with the Department of Labor to get back pay for workers who had worked through their breaks for many years. Only when workers saw their checks for back pay in their hands did they finally believe that they really were required to take breaks, no matter what their supervisors said.
We learned about the union (UNITE-HERE) campaign to address this problem while we were working in Chicago, probably 2005. The union there represented many workers in the Hyatt chain. What follows below is a description of the meeting in the state of California building in Oakland  in 2018, thirteen years later, where the Board voted to approve a musculoskeletal injury standard. ONe of the reasons for including this event in this post is to emphasize the duration of the project, the kind of commitment shown by the union and the workers, and the level of resources required to carry it out.
http://www.dir.ca.gov/OSHSB/Hotel-Housekeeping-Musculoskeletal-Injury-Prevention.html
The Hearing on January 18, 2018
In California, the musculo-skeletal injury standard was first introduced 6 years ago. It took getting new people appointed to the Board by a different Governor — Governor Brown — to get the standard accepted. The standard was finally accepted on January 18.

>Workers from UNITE HERE — hotel room cleaners — have come to the hearings every time the standard came before the board.  Some individual workers have been many times. This time they came, too, expecting it to win at last. Before the hearing the rallied in the lobby of the State building.

Once in the hearing chamber, they sat together with their red T-shirts.

The first person to testify was a neutral attorney, pointing out that the standard might allow someone to “go fishing” for data on accidents, leading to more lawsuits. The CAL OSHA staff, which was recommending the approval of the standard, explained that this was actually not the case.  The staff sat to the side of the chamber, below, listening and responding when called upon.

Two people had come on behalf of the Chamber of Commerce; one of them, the woman, asked about the economic impact of the standard. The spokesperson from the CAL-OSHA staff responded with a comparison of the amount spent on unemployment benefits and disability compensation.

The young woman is a representative from the Chamber of Commerce

After almost two hours of testimony, mostly by workers themselves, the Board asked if anyone else wanted to speak. No one did.  Then the vote was called. The vote was unanimous, in favor of establishing the standard. 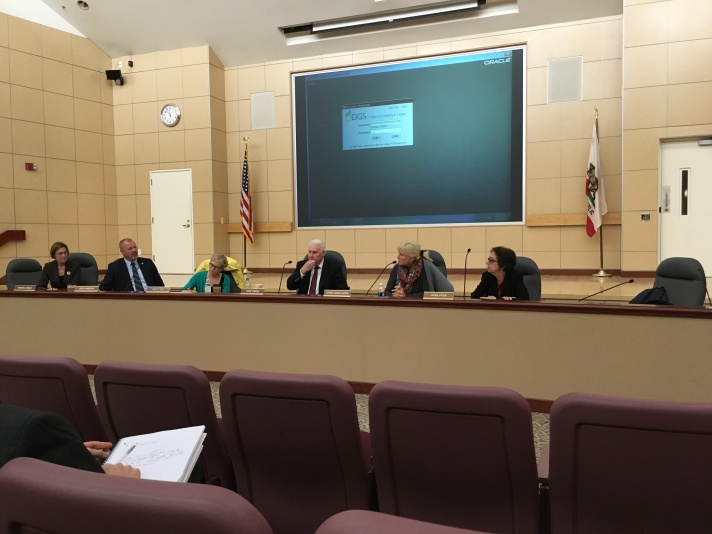 Now begins a new task: educating members to know when the standard is being violated and what to do, followed by enforcing it.