This is a picture of the airport in Guangzhou, China, where we had a 4 hour layover between flights on China Southern to Kathmandu. Dark, cavernous, empty. Of course it was the middle of the night.

And this is a picture of people trying to get a password to do their email with.  Unlike in an airport in the US, where you simply sit down next to your luggage, open your computer and click through a few links (of course, one of them is “I agree to the terms and conditions…etc.”) – in China, you sit down and try to open wifi; after a while you get a bright orange banner but no instructions whatsoever about what to do and nothing to click on. Eventually someone says,  “You have to go down there,” and  way down the hall a cluster of people will be huddled around a bank of kiosks. 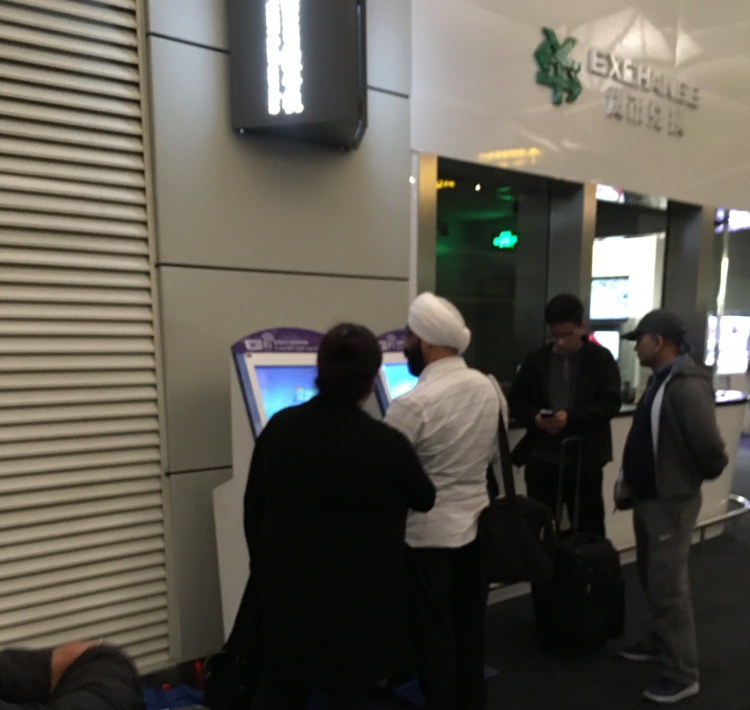 These kiosks are where you get your password. You have to not only insert all your flight information (on a keypad); you also have to scan your passport and put in your home phone number in the US and your email address. What else could they possibly ask for? It is as if they are collecting all the information they possibly can from everyone coming through the airport. The instructions are badly worded and the scanner is not intuitively designed, and the keyboard is slow to come up, so many people tried it (after standing in line while others tried) and failed and just said “Oh well” and went away. Eventually one person made it through and a password came spitting out on a piece of paper, like a movie ticket, from a slot low down on the kiosk. Then that person guided the others through the process.

Once I was into my email I also found that I could not open most links. Links to news sources would simply jam while loading. For a while, incredulous, I tried waiting. Eventually I tried Google and it jammed; I can’t remember if Wikipedia was blocked, but other things were. And yes, I couldn’t get into Facebook either.

Well, this is what we’ve heard about China, isn’t it?

I began looking around and noticing something about other evidences of technology. There was a whole lot of it, but it was not designed to be user-friendly or intuitive. It wasn’t designed with a strong sense of trying to make things easier for the user, of trying to an invisible mediator between a communicator and a receiving listener (What a concept! But so much of communication theory takes this as a basic assumption about the purpose of electronically assisted communication). The luggage carts have touch-screen ipad-type things between the handles, but they’re showing ads. There was a drinking water source where you could get cold, warm or hot water out of a faucet, but there were two sets of controls for each choice and you had to push them both at once in order to get any water at all, as if one was a lock/unlock for the other. This design would have been laughed out of the room in the Bay Area. Clearly, we were in a place where technology is cheap and easily deployed, but that no one cares or even thinks about what the users need or prefer. Instead, there is some creativity (the double controls for the water) but mostly, in the service of control.

By the time Joe had spent $9 for a cup of coffee I was in a bad mood. I wouldn’t have been surprised to be asked for my social security number when pressing the button for a paper towel in the ladies’ room.

All this is to be viewed in contrast with my previous post, about wide-open, bottom-up efforts in the US that we hope will  influence higher levels of society and government through local organizing. I want to mention that high school students all over the country are marching out of school to protest the failure of my generation to achieve gun control — this is after the latest shooting, in Parkland, Florida. I also see that there are widespread plans for registering young voters. These are kids who started learning about climate change in kindergarten, adopted at-risk-for-extinction animals or plants in the fourth grade, etc. And they don’t like being shot.

I am proposing these two extremes: the porous, bottom-up open-to-everyone “trust the crowd” practice of popular democracy, with its disasters like Trump, in the US, versus my glimpse of the level of control of specifically communication that I have heard and read about in China, which corresponds to what I have heard about the control of political or politically sensitive activity there.  I am thinking about these because, of course, the issue of what is politically sensitive and what level of control is necessary or tolerated is alive in Viet Nam. We certainly encounter it frequently. For example, as we discuss preparations and organizing for the big international conference that is to emerge from the Minimum Wage conference, we have to consider what is politically sensitive and what is not.

But so much for China; we are now in Nepal, quite a different story. A glimpse:  Here is a photo of a public event, some kind of award-giving ceremony, that is part of a trade fair being held in Patan Durbar Square. Patan is a UNESCO World Heritage Site. Patan is known as the City of Arts; it’s one of the three original cities that are now blended together – there’s Bahktaphur, the City of Agriculture, and Kathmandu, the City of Trade, which is where the government is.

The three-story brick building on the left (which was renovated and earthquake retrofitted after the 1934 earthquake and therefore did not, unlike a lot of buildings in central Kathmandu, fall down in the 2015 earthquake), is the old palace. The second floor with its carved lattice windows is where the king’s wives spent their lives. The monarchy apparently was nowhere near as exploitative as the Rana oligarchs, a group of elites that ran the country like a private estate and were overthrown in 1951. So the monarchy by itself, with a Parliament and a Constitution, was an improvement over the Ranas. The monarchy itself was only abolished in 2008 after the Maoist uprisings that began as student uprisings in the 1990s. The Maoists became part of the government beginning in 2007 and the Maoist party chairman, Prachanda, became Prime Minister in 2008. Then party splits, interethnic rivalry and efforts to create a new constitution seem to have characterized the next six years, which is as far as the book we bought at the Paten Book Shop takes me. I understand there is a new constitution and a very new Prime Minister now.

So far, we have not met anyone who can talk to us in an informed way about the situation. The word “corruption” is used freely. There is a lot of international money moving around, however. There are a lot of NGOs and there appears to be a steady stream of people from Europe and the US who come to volunteer in various capacities: house-building, for example. And we have been told that one third of the national income comes from workers sending back wages from overseas, mostly men and mostly from the Gulf. In fact, the night we left, we saw this with our own eyes at the airport: three flights to the Gulf going out at the same time, and the passengers lining up were all young men with backpacks. Their attitude seemed to be excited. They were jostling each other and laughing. They looked healthy and notably strong. It was hard to match this sight with what I have read about working conditions in the Gulf.

The ubiquitous hats are Nepali men’s wear; you fold the peak to represent whichever mountain you want to contemplate today.

Another city view of Patan Durbar: 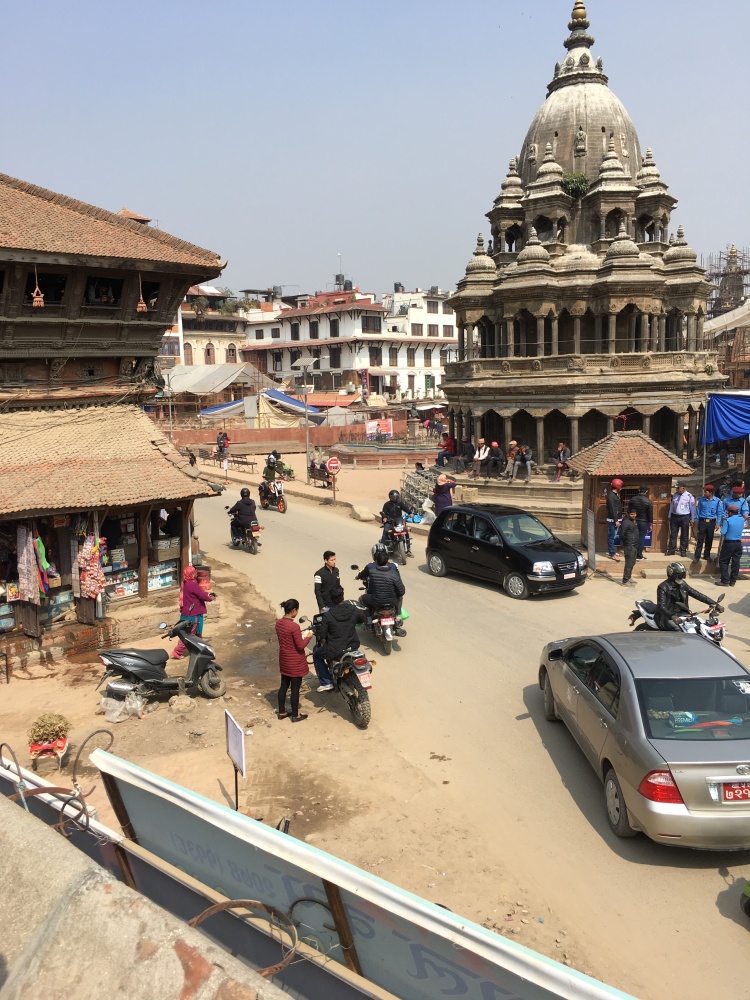 In 20016 One World Theater did a production of Arjuna’s Dilemna, which is on YouTube. The set was built right in the Patan Museum. There are eight sections on You Tube. Raj played Arjuna. You can see Alize dancing in this. Rajkumar is on the left, bare chested and gold.

Back at the Amore Guesthouse

Here is a picture of the guesthouse’s excellent cook, making a beans, rice and vegetable dish for us to eat later. 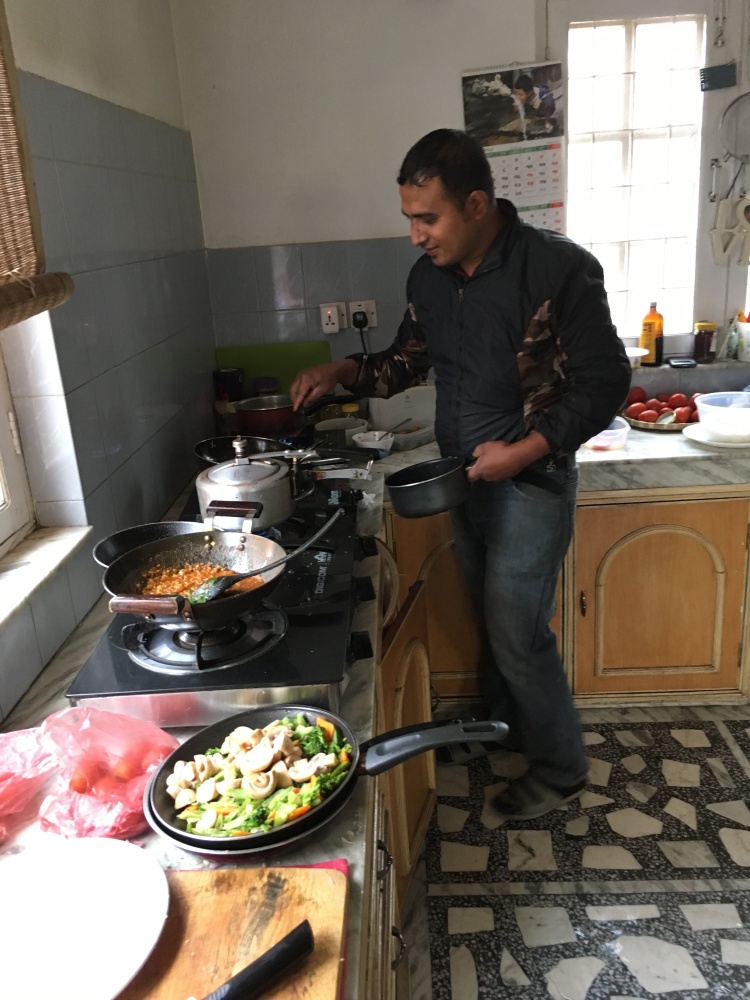