Things are happenings so fast that I may not be able to keep up, even though today is supposed to be an off-day. Thursday. A day when young women wear the ao dai. Many women faculty (called lecturers; here, “faculty” means department) do also, and the variations on it, mostly hand painted silk, are breathtaking. Some are painted with a single long stemmed flower, the stem on the shoulder and the petals all the way down the front to the hem. I think I would look pretty silly in one, however. We’ll see. It’s a great temptation.

Some more information about how the university works. As part of the move to a market economy (I am choosing my words carefully, here), the university was granted autonomy. That means, for example, that the government (which includes and in some way also is the same as the Communist Party) no longer places people in positions or runs it in a hands-on way. Instead, the university is free to design its own programs, hire people, run its own business and there is a firewall between it and the government. However, it also has to meet specific targets. The targets that I have been told about have to do with enrollment, programs, participation in international conferences, bringing in international visitors (that includes us) publications, etc etc – all the things one associates with active university life.

The catch is that along with autonomy is accountability, and the President himself is accountable for meeting the targets. He can fire people who work for him and be fired himself if the university fails to meet the targets. With regards to academic hierarchy: the English word “lecturers” is used for all faculty who teach, but they do have rank, based on degrees: MA, PhD., etc. Moving up from Assistant to Associate to Full Professor seems to be rather like our system, except that under our system, given the decline in support for public higher education since the 1970s, the preference is to hire part-time, adjunct professors and restrict the number of tenure-track and tenure positions, ultimately reducing the number of tenured faculty and creating a kind of wild west culture around actually getting the brass ring of tenure.

Today is the birthday of Ton Duc Thang, the founder of the university that bears his name. He was a contemporary of Ho Chi Minh and like Ho Chi Minh, he was a seaman (among many other jobs). Going to sea was one of the few ways that a Vietnamese working class person could get out of the country when it was under French colonial rule. That’s how Ho Chi Minh got out, too. Ton Duc Thang wound up in the French Navy and was on a ship that in the Black Sea when the Russian revolution started. The story goes that he was the person who climbed up the mast of the ship and hung out a black anarchist flag in solidarity with the revolution. Another story is that he was part of a plot to turn the ship itself over to the revolution.

He came back, became vice president under Ho Chi Minh, then President after the death of Ho Chi Minh. He died in 1980. That means that he was president during the re-unification period when Vietnam was trying to rebuild itself from the war and simultaneously create a socialist society. It was a period of great deprivation. Many of the “boat people” who wound up in California, including the people who showed up in my community college classrooms, came during this time. I remember teaching classes with Vietnamese refugees and Vietnam war vets sitting in the same classroom. The Soviets provided some support, but the war with Cambodia (I’m a little unclear on sequence, here) sapped the country even more, and the Chinese invaded from the north. How this all got settled I don’t know. Doi Moi, the “loosening of the rules” or “breaking the fences” and opening to the market economy didn’t begin until the mid 1980s. And then, to top it off, the Soviet Union collapsed. Socialist countries like Cuba and Vietnam that had depended on Soviet support felt the bottom drop out from under them.

But this morning, at 6:20 am, we were supposed to meet the rest of the Labor Relations and Trade Unions faculty in the office on the ground floor of Building B. It makes a lot of sense to have major public events at 6:30 am, due to the heat.

By the time we got there, however, perhaps 2 minutes late, the others had already left but Ms. La was just arriving, and another lecturer who had been waiting for her opened the door for us.
I will write more about Ms. La later. I have been told about her by many people, including Angie Ngoc Tran and everyone else. She was at one time the President of the Ho Chi Minh City Federation of Labor and she founded the Labor Relations and Trade Unions faculty here at Ton Duc Thang. She is a small woman about my age, or maybe ten years younger. Today she wore a blue ao dai. People pay very close attention to her; she makes a small gesture with a few fingers, and people step into line. “Respect” doesn’t adequately describe the way people respond to her. But it’s not fear, either.

We follow her and the other lecturer out to the area at the front of the university where a huge gold bust of Ton Duc Thang stands on a pillar, surrounded by flowering bushes. Steps lead up to it. Below the pillar students and faculty were lined up five or six deep, maybe a hundred per row, women on one side and men on the other. Women in their ao dai, the men in white shirts and black pants, except for Joe, who was wearing a blue shirt. There we were, next to Ms. La, which put us in the very center of the front row. Joe again was head and shoulders above everyone else. 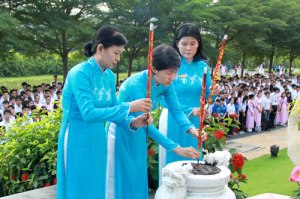 A woman spoke, a man spoke, and part of what they said was the story of Ton Duc Thang. Then six young men (including Nghia) and three young women in pink ao dai came down from behind the flowers and sang two songs. Four young women in blue and white danced a story in front of them – and in front of us – using blue scarves. One of the songs was the national anthem, fully recognizable as a national anthem because of its strong, hopeful melody and repeated assertive chorus. I am someone who enjoys singing Solidarity Forever just for the fun of it. I actually tear up singing the Internationale. A good national anthem like this has the same goose-bumps-producing effect on me even if I don’t understand a word. I got goose bumps.

Vinh came forward from behind and started translating into our ears.

I want to say something about the music I am hearing in Vietnam, everything from the music in the restaurant that Dean Hoa and Vinh took us to on Tuesday to the flute music that seems to float around over the canal between the classroom buildings and the soccer stadium, and the song that came before the national anthem in this ceremony. It may be my European-colonialist alter identity, from listening to too much Madame Butterfly – but it all seems to be about distance, goodbyes, large ships sailing back to a different world and leaving loved ones behind, great treasures that can never be adequately described, bittersweet melodies, etc. Vinh has Chopin on her cell phone, but the music I’m talking about is even more lush than Chopin. They are lush like the paintings of pheasants and peacocks on the walls in Chinese restaurants, or calligraphy. The images are not about Europeans exploring Asia; it’s about leaving Asia after having been there and seen wonders they can’t comprehend and will never be able to explain to people back home.

Enough of that. After the dance, a man brought forward some thick sticks of incense and two men who are probably important people in the University carried them up to the pillar, bowed their heads for a moment, and then placed the incense sticks into a holder filled with rocks and sand. Ms La and another woman were next. Then it was our turn. We were given incense sticks, climbed the steps, bowed our heads (at least I did) and placed the incense. No one said what sort of prayer we were supposed to be thinking. The moment passed very quickly. I need to be  more prepared for things like this. Then we walked past the pillar and down the other side.

Afterwards we went and had breakfast in the student canteen in Building C and then I went back to our room, because I had to change my shirt (a brand new white T-shirt, on which I of course spilled the spicy Pho broth, which happened to be reddish like tomatoes or paprika). I have to learn to eat differently or else wear only dark patterned shirts and scarves. When I pick up the noodles in Pho with my chopsticks, they flip the broth all over my front. Stains just don’t come out of white cotton. 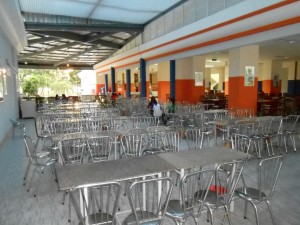 Student canteen around the corner from our room. Sometimes, it’s full of students.

I was able to get MS Office to work on my new laptop and used StrongVPN to do some house management back in CA and Vermont. Some students also sent me a fundraising flyer to correct their English for their website. They are raising money for “Jailbreak Vietnam,” a challenge to see how far into the countryside they can get hitch hiking, with no money. “Jailbreak” is actually an international youth organization with a website. The idea is to raise money for charity by traveling, in this case to support scholarships for children in primary school. I have not seen a project like this before. Hitch-hiking with no money? In addition to raising money, the goals of the project include facing fears about accidents and sexism, gaining confidence.
And that was all before lunch, which gave us a choice, up in the faculty dining room on the 11th floor of Building C, of stuffed octopus, grilled fish heads, shrimp, a fish-egg meatloaf type thing in a bowl, pho and something like kim chi. An avocado smoothie for dessert.

Now I need to get some work done. If nothing else happens today, that will be a good thing.

But on the way back to our room about 7 pm, we saw a group of ten to fifteen young people, the girls wearing ao dais, boys in their white shirts and black trousers, doing something that looked like hip-hop line dancing under a streetlight. One of them greeted us. We are ESL magnets! And they are second year law students, hoping to graduate and become police officers (who do not wear guns, by the way, except for when protecting the President on a special day, we were told), and they are rehearsing for going camping together in Da Nang over the September 2 break. They and the rest of their group will all go together, on 100 motorbikes. Presumably, when they get there, these aspiring cops will all do a lot of dancing.

Sleep on that one.