I posted this blog on the United Association for Labor Education list serve and Fred Lonidier, the photographer, replied with a link to his photos which are on the Civil Rights and Labor History Photo and Document archives at the University of Washington – it’s part of the Harry Bridges Center. He wrote:

I have a lot of photos of Draft Resistance Seattle around 1966-67: http://depts.washington.edu/labpics/repository/v/antiwar/lonidier/

Page after page of black and white images, showing people, protests, signs, newspaper articles. Seems like yesterday to me. But the people we are relating to here are of the next generation.

In the stories in Kent Wong and An Le’s book, Organizing on Separate Shores (UCLA Labor Center), the connection between then and now is made explicitly. Every one of the stories about the lives of the Vietnamese-American labor organizers begins with how they were affected by the war. Even if they were born after the war, the story begins with the war and how it changed the lives of their parents.

But we have not had any comparable conversations. Vinh is 26; Dean Hoa is in his forties; only Miss La is probably of our generation. So far we have learned that she worked in school, became president of her union, and then came to Ho Chi Minh City. The oldest people I see around campus are the men and women who, wearing conical bamboo hats, sweep the paths and roadways with woven straw, clean the rooms (like ours), push the green plastic garbage bins and take their lunch on the tiles of the arcade going into the soccer stadium.

Vinh took us shopping at the Lotte Mall Friday afternoon. A dedicated bus. #86, runs from the campus northeast into downtown Ho Chi Minh City and passes the mall, which is really within walking distance if you’re up for it in the heat. The ride is 5,000 dong or about 22 cents per person. The Mall is a single two story building, sort of a Target, with a food court (we ate there), bookstore (we bought maps), movie theater showing many US and Asian action films, and a clothing, kitchen and hardware section and then downstairs a big Safeway–type grocery store. Sensory overload again. 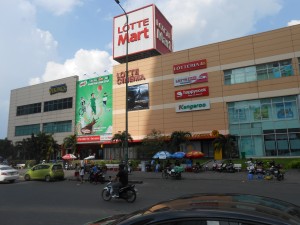 Hard to shop. I was looking for some gym pants and did buy some, for 179,000 dong or about $8. Then back on the bus, went swimming in the gorgeous pool overhung with what look like oleanders, except that the flowers are big milky white lilies. A rosy sunset helped me figure out which way was west.

Back to the room, worked on Power points for next week’s classes, and collapsed.

Saturday, we got up and walked all around the university exploring. There is a set of outdoor exercise stations near the canteen, overlooking the canal. North and west of the campus beyond the canal, are wetlands. In the future, that land will be developed. Around the campus we found guarded motorbike parking lots, a much larger canteen with about 100 tables, the photocopy shop and what looks like a horticulture program, packed with lush plants. We found a huge martial arts room with mats and students in white canvas outfits, and the exercise gym and yoga room, all very clean, mirrored and modern, but closed.

I experimented with greeting people and can now say that a smile by itself doesn’t get you anything; you have to bow your head and nod.

Back in the room we worked on our various class handouts again and emailed them to Vinh for translation. Later, three young women knocked on our door and took us, on the 86 bus, into District 1, the center of town. The young women’s names were Mai, Pi, and Tam. Pi and Tam work together at a child care center. Tam is in both Joe’s class and my class. Mai won a scholarship last summer to go study English at CSU Monterey Bay. Angie Ngoc Tran teaches there and did the interviewing for the scholarships. They are part of a group of volunteers who work with international visitors with whom they can practice their English.

So we were guided around the highlights of old Saigon by three lively young women in the universal student outfit of tight black pants and backpacks. We went to the main bus station, to the huge indoor market (where I bought two blouses), to a bookstore and to an eating place “for students and working people” where you enter into a pillared alley, probably the back of a once-grand house, past several dozen women sitting on low stools cooking things deep pots over open fires, and find a low table to sit at. One of the managers comes and asks you what you want and you pay and then go get it. I put myself in the hands of our guides and wound up with some spicy chicken and sticky rice. A small bulldog and a kitten snuffled around under our table. Then to the Post Office, very grand and beautiful, and the Cathedral, and eventually home just in time to get into the swimming pool at sunset.

Today (Sunday) Vinh called and said she and her fiancé would take us out to breakfast. Again, taxi into the center of town (about 125000 dong, or $5.50), but this time breakfast in a grand outdoor café next to the Independence Palace, built (or re-built) in the 1960s and occupied by various presidents of South Vietnam until the liberation in April 1975. After breakfast we walked through the palace, which is now an open museum where you can look into the reception halls, salons and offices. It has been kept as it was: carpets, chandeliers, gold and red furnishings, art. The private apartments of the President and his family, with dining tables all set with knives and forks and wine glasses. This is where American advisors met with Vietnamese leaders and diplomats to plan and carry out the war, and ultimately, to abandon it.

I need to get the sequence of events in April 1975 right. Things move very fast.

From the roof, which had originally been designed as a meditation room but then remodeled by President Thieu into a party room with a dance floor and blast-proof glass walls, you can see the helicopter which is a US made Huey that was President Thieu’s helicopter. Also marked on the roof is a circle where the NLF airforce pilot, returning from a different mission, took a chance and dropped bombs on the Presidential Palace, a few weeks before the final fall of South Vietnam.

Down below, parked under the trees, you can see the two NLF tanks that broke through the wall around the palace. The young lieutenant who was driving the tank got out, walked up the steps of the palace, accepted the surrender of the government and raised the NLF flag. Maybe a little bit of legend here, but that’s the main idea. Down in the basement under the palace is a large bunker with many rooms, communications center and apartments, for the use of the President, and he did use it. Gray walls, cement, metal doors that lock.

Rooms both in the bunker and up on the upper floors have floor-to-ceiling maps on which the military progress or retreat was marked. The paper is yellowed but you can still see the colors. The details appear to be hand-drawn.

So Friday, Saturday and Sunday have been spent exploring the world we have entered. I am glad that we’ll be here six months. It’s too much.

Old Saigon, or District 1, has big parks, roundabouts, narrow one-way streets, fancy hotels and public buildings painted bright yellow or tangerine. The street trees are taller than most city trees – they rise up to the third or fourth stories of buildings. The typical apartment building is narrow – maybe 24 feet frontage – and four or five stories tall, with commercial on the ground floor and balconies full of plants on the upper floors. Most buildings are no more than 5 stories tall. Traffic: if there are two private cars on a block, there are twenty taxis and a hundred motorbikes. It flows smoothly, slowly and steadily. There is no street parking. Motorbikes park up on the sidewalk. Crossing the street is best done in large groups; vehicles will flow around you, but sometimes very close. Traffic obeys the red lights, pretty much. Right now there are lots of red banners with yellow stars and the hammer and sickle, getting ready for Independence Day. The pollution is not too bad. Looking at the sky, it’s bluer than LA. People riding motorbikes almost all wear masks, however. They also cover up, to protect their skin from the sun. So you see women wearing long-sleeved jackets and long skirts riding on motorbikes. In the parks, group athletics, exercise and outdoor events are going on.

This is a picture of Vinh taken at a different time, another time when we went to lunch with her.  This is the restaurant where she and Dean Hoa took us to eat on our first day here, straight off the plane. Everything is very good and fresh. If you are getting pho, they bring you a sheaf of spicy, minty greens and you peel off the leaves and put them in your pho. 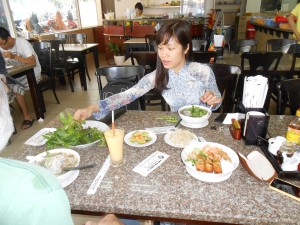