Joe asks his class to discuss in groups, then make a list to answer the question: “What do workers need from a good local grassroots union? What do they need it to do?”

Here are the items from the six lists that the students wrote on the board in Vietnamese, translated by Vinh and typed up as she spoke:

Joe noted that this list does not include helping mangers manage the business. Therefore we can say that this list assumes a capitalist and somewhat adversarial relationship between workers and employers. It also does not include motivating workers to be more productive. It does not mention enforcing the contract, which is half of the collective bargaining relationship, the other half being negotiation. Nor does it mention enforcing the laws. What ‘s more, the students did not limit the union to the collective bargaining function. Their list included things that you could not get from a CBA such as education, recreation, or “the policy to get a loan,” which is sort of a union credit union.

I noted that there are some items that are necessary for union democracy, such as showing respect, sharing opinions with the union and with each other, maybe the self-actualization point, and the word “democracy” actually came up. But there are no procedures listed such as voting to ratify a contract or running for office as a union leader. 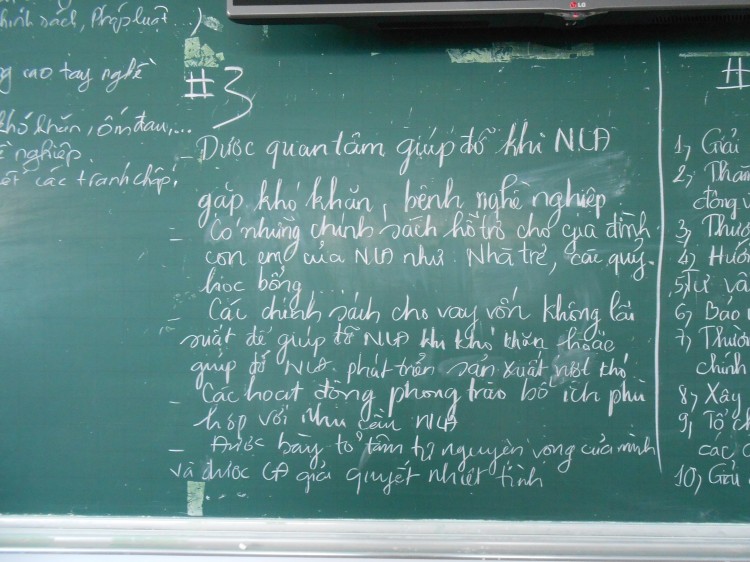 Joe noted that the six lists overlapped in many ways, but by having six of them, we got a wider range of ideas than we would have if we had just made one list. This is a familiar popular education technique but also good for brainstorming if you are going to do a strategic planning exercise. The point here is that democratic discussion is worth the time; this is a better list than any individual or any one group could have. Although it took more time, it made a better basis for the whole class to move forward.