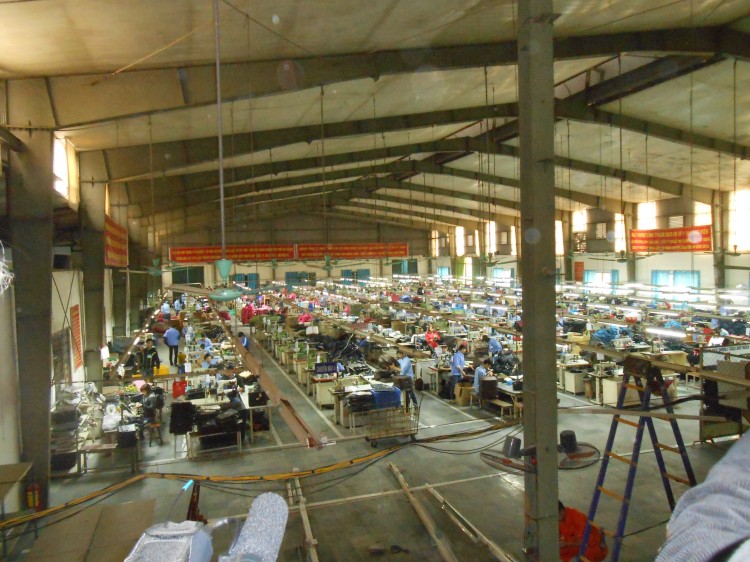 Kent Wong’s delegation made a visit to a Vietnamese factory on Tuesday afternoon.

We drove out in a van to a town perhaps 45 minutes outside Hanoi  toward Haiphong, but still with the Hanoi address. This company is 24 years old, founded in 1992. It is a joint stock company; its capital is all Vietnamese. The workers are shareholders. I couldn’t tell if they were all shareholders.

The village where the factory is located might be one of the traditional leather villages. The Old Quarter of Hanoi, organized by crafts gathered on certain streets, is also the market for traditional craft villages, and this would have been one of the leather villages. This goes back to the 15th century. So here in this village, 60% of the workers work for this factory.

I am sick right now, with cough, fever and aches and pains, so I’m not writing a lot. I’ll just put up some pictures. I think I caught this from one of the US delegation who came down with all the same symptoms about a day ahead of us. None of us got flu shots this year, since we left in August, and so we have no resistance. Joe has it, too. Leanna has it up in Hanoi (we’re back in HCMC now) and she was in the room at the Women’s Union University when we were there.

This is Mr. Dinh Quang Bao, Chairman of the Management Board.

I asked Mr. Bao  if they have  a CBA and he said yes; I asked if I could have a copy of it, and they made me one. This is the first Vietnamese CBA that we’ve seen. The woman below is the head of the local union, and that’s the CBA. 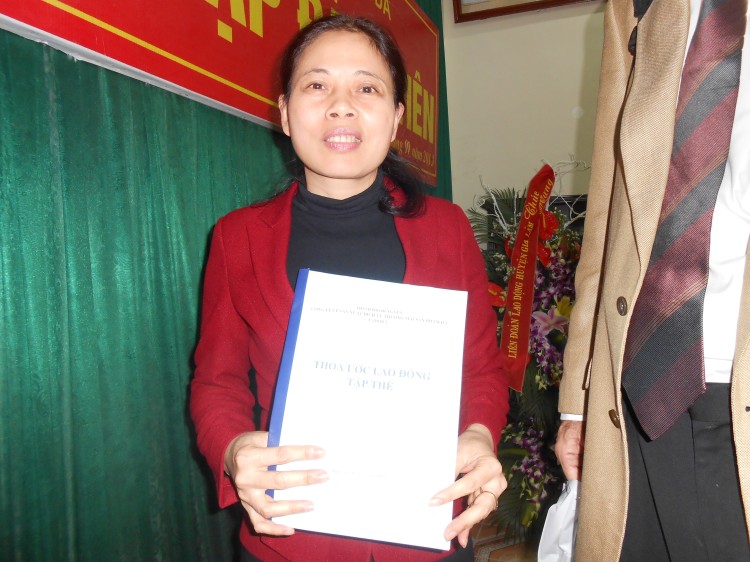 Ms. Dinh Thanh Ha, Operations Manager and Chief Accountant, also Local Union President, holding a copy of their CBA which she then gave to me.

Below is the weekly schedule of meetings. The flowers were just stored there for the time being. 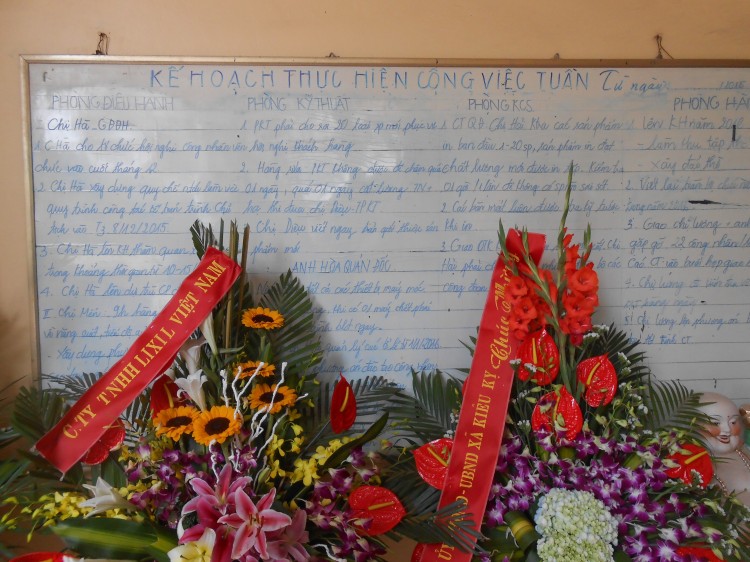 From my notes on the Chairman’s presentation:

The Ladoga bags are a top brand in Viet Nam. There are two other factories that produce this brand. They have 370 outlets and do ISO 2008 standards. Outside Viet Nam they ship to Hungary, Germany, Poland, the US. Thirty percent of their output goes to the US. They also make the bags for the Party Congress.

At the factory, they have the Trade Union organization, the  Youth Organization, the Party Organization (even though the factory if private), the Women’s Organization, and an organization to set up activities like sports and athletic events. They do emulation eery moth and classify workers on their performance. 80% get an A, 50% get a high level and a bonus, and about 25 workers are recognized as top workers. If someone is an “emulation soldier,” they get a bonus. The Vice President of the Leather Shoe Association of VN is (either on the board of Ladoga or else holds some other position) as does the President of the Leather Shoe Association here.

They employ about 400 people. Workers come from 25 provinces. Housing is supplied, free. They have trained between 3,000 – 4,000 workers. In 24 years, they have never had to discipline a worker. The company pays 50% of a wedding. Unskilled workers make 4.5 M per month. Women retire at 55, men at 60. If you take early retirement, you get 1 month’s salary for each year of work. The company pays 22% for social benefits and workers pay 11%.

Walking through the factory floor I saw people working hard and steadily, but not hurrying. A young girl doing gluing had a mask, but the smell from the glue spread out across the floor. It wasn’t dusty. Some of the motions required for shoving and pulling a large canvas bag through the sewing machine take a lot of muscle, though, and doing them over and over again all day long would hurt. The workers seemed young, not as young as our students but certainly in their 20s, and physically strong, especially the young men.

The sewing machines are mostly Unicorn, a South Korean company.