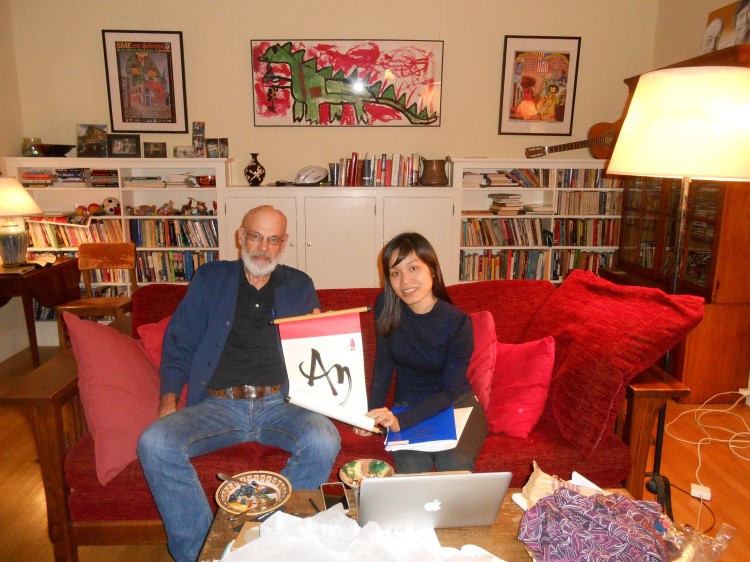 Vinh came to the US on a Department of State tour, visiting Washington DC, Chicago, San Francisco and New Orleans to look at examples of Civic Engagement. We were able to get her over to Berkeley one night. I tried to cook some Vietnamese marrow bone broth with veggies and she did not say it was awful, and she ate one bowl of it, so it was probably OK. She brought presents (“women’s clothes”!!) for me and a beautiful red-bordered scroll with words written in calligraphy from Vy and An. The central word means “Peace.”  We will hang it somewhere where we can look at it often.

We went up to Tilden Park and stopped at the Brazil Building to see the Akebono Cherry trees: 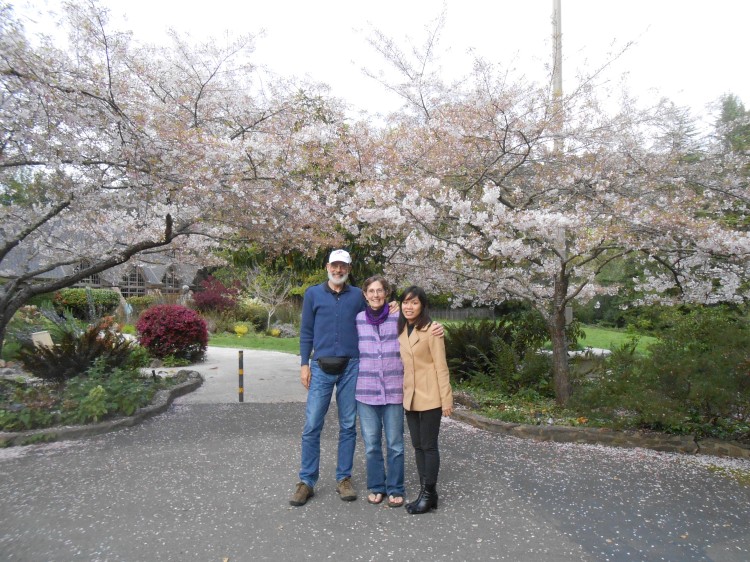 And then down Strawberry Canyon to the UC Campus where Vinh posed by the entrance: 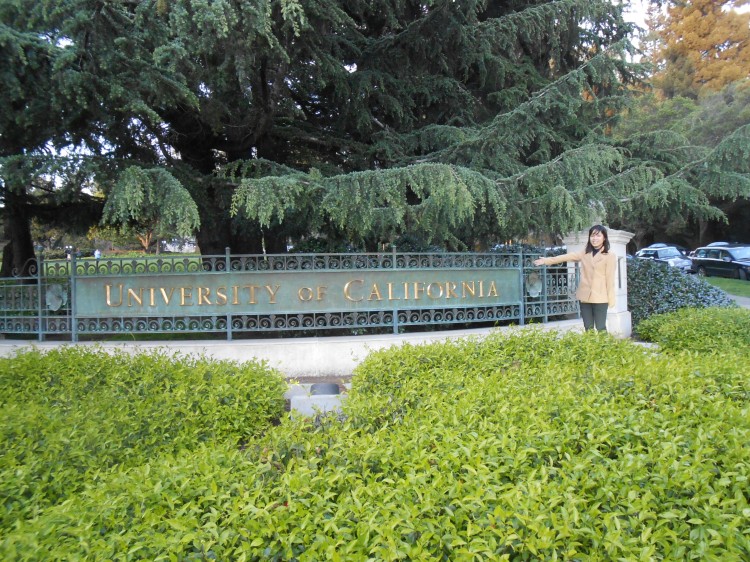 Nghia is writing a blog now on blogspot, about labor in Viet Nam:

Katie Quan, http://laborcenter.berkeley.edu/author/katie-quan/ left for Viet Nam on Saturday the 26th, to work on a project design activity having to do with the changing labor and industrial relations situation there. She will only be there a short time but will come to TDTU and hopes to meet with Vinh as well as Nghia and An and Vy.

David Bacon, the labor journalist and photographer, came back from Viet Nam and has now published an article in The Nation:

All this happening at once, and the fact that we leave tomorrow morning to go to Labor Notes in Chicago – a huge labor activist meeting that will begin with a Labor for Bernie session – has motivated me to write up a few more things about TPP and Viet Nam. Nghia also nudged me to write this.

More on the TPP: How does the US labor establishment view Viet Nam labor?

The general impression you get in the US is that most of the voices in the debate about TPP (the Trans Pacific Partnership trade agreement) are against it. They focus on the fact that the main effect of the TPP will be to protect corporate supply chain value, which is true. But when we were in Viet Nam, most of the people we talked to about TPP were in favor of it, or at least were actively preparing for becoming part of it. They were focusing on the possibility of forming independent, autonomous unions. Given the wording of the Labor Side Letter about Vietnamese unions, these could turn out to be real fighting unions, capable of restraining the free-market capitalism that is fast coming to Viet Nam. I will explain why near the end of this post. Labor activists in the US should read the Labor Side Letter and say, “This looks a lot like us, with some rights and goodies we don’t have.”  And then ask, “Since we have so much in common, can’t we work together?”

Of course, something else we have in common is the corporations that run the supply chains. And remember that moment at the labor ed class  in Bien Hoa when the slide of Katie Jordan, protesting WalMart in Chicago, reminded me that minimum wage in both Chicago and Ho Chi Minh City has the same purchasing power: a cheap lunch. Pho in HCMC, a sandwich in Chicago. Actual living on minimum wage, here or there, is impossible.

First, what is the argument that US labor is making against the TPP?

Here is a summary statement of the criticism of TPP from the AFL CIO’s report, A Gold Standard for Workers? The State of Labor Rights in the Trans Pacific Partnership Countries. Although there is no date on the report, it came out in winter 2015-16 and bears the names of the AFL CIO top leaders, Richard Trumka, Elizabeth Shuler, and Tefere Gebre. It cites a longer preliminary study done by the Labor Advisory Committee (LAC):

Overall, the LAC found the TPP is likely to harm U.S. manufacturing interests, cost good jobs, suppress wages, and threaten our democracy and economic security interests, while doing little to improve conditions for workers in the United States and overseas (page 1).

Because employers in our trading partner countries will continue to abuse workplace rights, workers throughout the TPP region will continue to make lower wages and will have fewer benefits and more dangerous workplaces than they otherwise might. An injury to a worker in Vietnam will indeed affect his or her American counterpart by driving down wages and working conditions (page 5).

The AFL CIO report then walks through the various countries that will join the TPP, summarizing the labor situation in each one in a few paragraphs. The first four are under the heading, “Countries with Critical Labor Rights Violations,” and Viet Nam is among these. Viet Nam is included among the four most serious violators:

My summaries do not include every detail listed in the report. In fact, there is a way to hold a legal strike in Viet Nam, although it is extremely difficult to use because of the number and variety of conditions that have to be satisfied in order to make it legal – thus, all the wildcat strikes. I don’t know about child labor and I don’t know about compulsory labor for drug offenders. The Viet Nam part of this report gave citations from Human Rights Watch and the Workers Rights Consortium, such as http://www.workersrights.org/linkeddocs/WRC_Vietnam_Briefing_Paper.pdf

The next category, “Countries of Serious Concern” includes:

Then comes a section on specific issues:

The US is not mentioned in the AFL-CIO report. If we were, we would obviously be a “Country of Serious Concern”. In some ways we look most like Chile, with less than 8% representation in the private sector, right-to-work laws, some states that limit or have no right to collective bargaining for public sector workers, the whole independent contractor scam, and prison labor – in private prisons, no less! But apparently this was not the place to raise those issues.

So how does the LAC/AFL-CIO’s assessment of Viet Nam’s labor practices look to us, having been there while all this was happening?

The AFL-CIO report sounds as if it got some of its inspiration from the reactionary anti-communist forces that have made their home here in the US. It doesn’t show much understanding of the overall changes that are taking place in Viet Nam as we experienced them.

But why are people in Viet Nam excited about TPP?

The TPP requires Viet Nam to sign on to the two ILO conventions that cover freedom of association (independent, autonomous unions), collective bargaining and organizing. To implement these would force some fundamental changes in the Vietnamese industrial relations system. The Labor Side Agreement spells out in great detail what these changes would look like. At the time we left Viet Nam in mid-February, the latest information that we had on how Vietnamese organized labor would respond was as follows:

The VCGL acknowledges itself as a bureaucratic organization that primarily speaks to the state, not to its members;

It recognizes that it has to re-invent itself as a bottom-up, organizing union (in the words of someone who knows);

That this will require a fundamental change in the culture and social relationships of the organization;

To deal with this, Dang Ngoc Tung, President of the VGCL, has made it a condition of VGCL support for TPP that the VCGL be autonomous itself, with regard to finances and especially with regard to hiring personnel; (At present, the VCGL does not hire its own staff. Staff is vetted by the State and referred to the VCGL.)

That it would probably take two years, at least, to design and set up the permitting process by which “independent, autonomous unions” could be certified (this would not be done by the VGCL but would have to be done by some coordinating office, possibly the ILO);

In the meantime, training may take place within various NGO’s that are already in existence. At the time when permitting is ready, these NGO’s might become unions. The types of NGO’s that could form the basis of future autonomous unions would be workers’ centers or nodes of local bottom-up organizing at workplaces.

This summary is drawn from my own personal surmises, information from on-lookers, and from people who can speak with some authority. My impression was that there was not only no ban on talking about these changes, but that there was some excitement about it – a kind of “Yes we can!” feeling, connected to becoming part of the global economy.

And maybe, the Labor Side Agreement to TPP is enforceable after all

When critics of TPP say that it is unenforceable they are talking about mechanisms of enforcement like trade sanctions and fines (page 3 of the AFL CIO report). The violations that they identify are things like not meeting deadlines, skipping evaluations, failure to advance a dispute process. This is enforcement from the top. In fact, enforcement of an agreement about labor conditions has to come from the bottom. It has to come from the threat of workers to withdraw from the deal they make with an employer: I will work and you will pay me. This is called withholding labor, or various kinds of strikes. But in order to use this approach to enforcement, the union has to be strong. Not rich or politically connected: strong, with active, informed, committed members.

Therefore the question that matters is, will these new independent autonomous unions (or the re-invented VGCL) be strong unions? Will they have the power to enforce protections for workers from the bottom? Do they have the freedom to organize to get that power? The VGCL does not have this power. Whether this is because of generations of acting as if the class struggle was over, or because of something else, who knows? The wildcat strikes that have moved disputes forward and gained some protections have not been led by the VGCL – in fact, a definition of a wildcat strike is one that is not led by the union. But will the new independent unions have this power?

It is possible that they might. Here are some conditions that are supposed to frame these new unions (for more details, see my post on December 13, 2015), “A Close Reading of the TPP Labor Side Agreement”). Under these conditions, they might be stronger than unions in the US.

If these conditions are fulfilled, there is a real reason to think that these unions could be fighting unions capable of dealing with the employers that are coming in to Viet Nam these days. On the other hand, there may be a harvest of employer-created yellow unions, or there may be unions that exist for the main purpose of undercutting the VCGL and destabilizing the government.

That aside, my first reaction to seeing this list was to ask, “What would happen if these conditions were in place in the US?” Our industrial relations system assumes that unions exist to fight. Our discourse about labor is all about struggle, fight, struggle. But here in the US we don’t get much help fighting. In fact, although we get a ticket to climb into the ring, but then we’re on our own in a hostile environment where many of our tools have been taken away.  When Vietnamese students ask us about why the US labor movement only represents 8% or so of workers, we have to say that although we’re not only allowed, we’re expected to fight, but the odds against us are stacked.

Which makes me look over to the Viet Nam TPP Labor Side Agreement and think, “Is it possible? Are they going to be able to do it?” Answer: Maybe.