I have begun to write this blog mainly for our students and friends in Viet Nam, to try to show them in concrete terms what life in the US labor movement looks like. 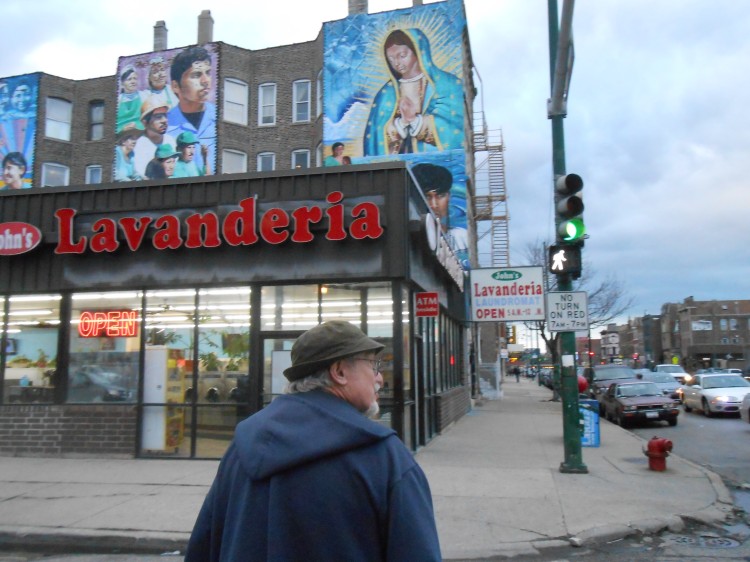 John Weber, muralist, walking up Ashland toward the Mexican restaurant where we’re going to have dinner. This was last Thursday. We were in Chicago for 5 days to go to Labor Notes, a huge labor left conference that happens every two years. This neighborhood is called Pilsen; it was once full of immigrants from Central Europe, now it’s Mexican and Latin American. There are murals all over the place, many explicitly political in various ways.

I’ve got two hours in Kansas City between flights going home from Chicago to Oakland. I’ll take these two hours to write up something about the last 5 days. The Wisconsin primary is taking place right now; the banner line on the TVs says first exit polls will be available “in a few minutes”.  But “a few minutes” have gone by, plus some, and I am going to have to get on the plane and be in the air when the results come out.

Labor Notes is both a monthly newsprint magazine and a conference held every two years. It is based in Detroit but now has an office in New York. A small staff of about 7 very dedicated people do all the work. When I first started going to Labor Notes , there were perhaps 300 people total. This would have been in the 1990s. This past weekend’s conference had nearly 2,000.

The people who come are labor activists, often from reform movements within the giant unions that may be suffering from a lack of democracy. Some times these people have won an election and are now in leadership positions. Sometimes they are struggling, trying to organize and run against an entrenched leadership. Two years ago the new leadership of the ATU brought over 100 people. The Postal Workers, who elected a new President two years ago, brought a lot of people. People come from very small groups, small political organizations, and from large ones. Sometimes 5, 10 or 20 people from some union come together. They may split up and go to the many sessions or they may all stick together and go to the same session. Sessions range from semi-classes on specific topics (grievances; health and safety in the fast food industry; understanding TPP) to sessions out of which some kind of commitment to action is supposed to emerge.

The Chicago public school teachers were holding a one-day strike. As we rode up Ashland on the bus, we passed two schools where the teachers were out picketing. Lots of yelling, shouting, cheering, horn-honking. 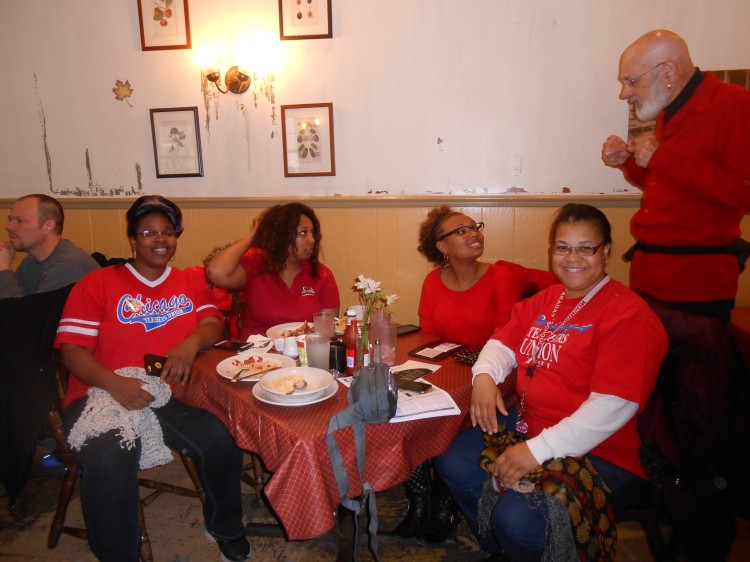 People also come to Labor Notes as individuals. Joe and I came because it’s a place to learn what’s going on, to see friends from all over the country (especially Chicago, where we worked), and because I planned to meet Tim Sheard, who published my book, What Did You Learn at Work Today? and who had reserved a display table for his authors. I was going to talk about my book and try to snag some more readers and writers to do reviews of it.

The increase in attendance at Labor Notes this year is a measure of the increased activism in the US labor movement. As things get tougher, some people feel more ready to fight. Often, they have to fight their own unions if their own unions have withered and become sleepy, fat bureaucracies. Many of the stories told at Labor Notes are about how a group of activists took power and then faced the challenges of leadership. One of the books on display was Bill Barry’s, “I Got Elected – Now What?”

I could tell some wild stories about reform movements that succeeded in getting control of their union but then faced other challenges.

I went to a session in which young Chinese labor activists talked about strikes and the political climate there, and a session on TPP in which the people actually balanced the question of loss of US jobs with the problems of nationalism, and the need to make connections with labor movements in TPP countries. Some of the strongest speakers against the blinder of nationalism were workers from manufacturing plants in the Midwest who knew from personal experience about job loss.

On Friday afternoon, before the conference started, there was a Labor for Bernie meeting in the hotel across the street. There were about 300-500 people there. Bernie’s communications strategy guy, who had been president of the Communications Workers of America, spoke, emphasizing that although Bernie could conceivably win the nomination, the fight was going to have to continue beyond the primaries and might involve establishing some kind of ongoing organization that would continue to push for the priorities that he stands for. Lots of talk ensued; a woman who had been secretary of the Labor Party, which collapsed under its own constraining by-laws back in the late 1990s, warned against establishing something too rigid — too much of a party, not enough of a movement.

One of the discussions going on at the Labor for Bernie session. There were 300 or more people there.

It was impossible to take a picture of what the crowd of two thousand or so looked like when we gathered in the Grand Ballroom for the plenaries or the banquet. So here is a picture of one individual session. This was a session on handling grievances that focuses on doing it in a way that activates and organizes members. You should compare this with the simulation sessions that Joe and I did at TDTU when we were talking about contract enforcement: solving problems that affect one or a few people, and solving problems that are really about protecting the union and its power. The point of showing this picture is to indicate how many people came to this session. (There would be 8 or 10 sessions running concurrently.)  Most of these people are experienced activists — stewards — but you could tell from the questions that they asked that some of them were new to their responsibilities. They came from all kinds of different industries and had all kinds of different levels of academic preparation (this is in response to a question asked of us in Viet Nam about whether blue collar workers could lead a union). 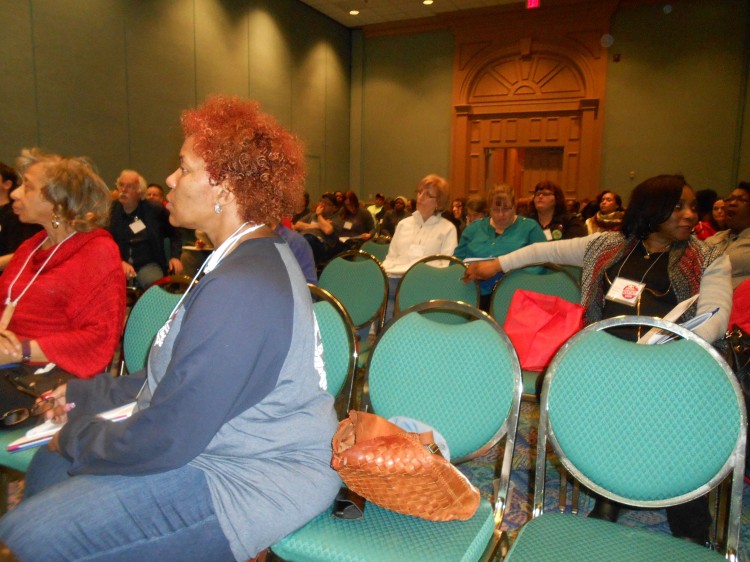 One last thing, to illustrate a contrast that I find hard to put into words. The picture below is of a Viet Nam War memorial, of sorts.The gray, carpet-like shimmering canopy installed above the escalators is made up of thousands of dog tags, each one representing a US soldier who died in Viet Nam. They all move slightly when the air moves.

This is at the Harold Washington Library, a beautiful useful building on Van Buren and State Streets. There are some wall postings that explain the installation and also a touch-screen table that has quite a few photographs on it as well as maps, explanations, etc.

But overall, the impact is cool. You can pass under the canopy and not wonder what it is. It could just be an elaborate light fixture. It feels, I’m sorry to say, kind of perfunctory, more like an idea than a message. Looking at it, I felt my heart retreating into some of the distance that I felt about Viet Nam before going there.

And when I got off the plane in Oakland I got a message on my phone that Bernie had won in Wisconsin.

One thought on “Chicago, Labor Notes, Bernie in Wisconsin”